The June Job Openings and Labor Turnover Survey (JOLTS) data released this morning by the Bureau of Labor Statistics paint a grim picture of job opportunities in today’s labor market. The “hires rate”—the share of total employment accounted for by new hires—is an important comprehensive measure of the strength of job opportunities because it incorporates two components: 1) net new hires, and 2) new hires that are due to “churn” (i.e., hires that are replacing vacated or lost positions, described in more detail below). In June, 3.1 percent of all jobs were hires. This was a substantial drop from May, when the hires rate was 3.3 percent. As Figure A shows, there has been very little improvement in the hires rate since its low of the recession in June 2009, four years ago—and there has been no sustained improvement whatsoever in the hires rate for two years. 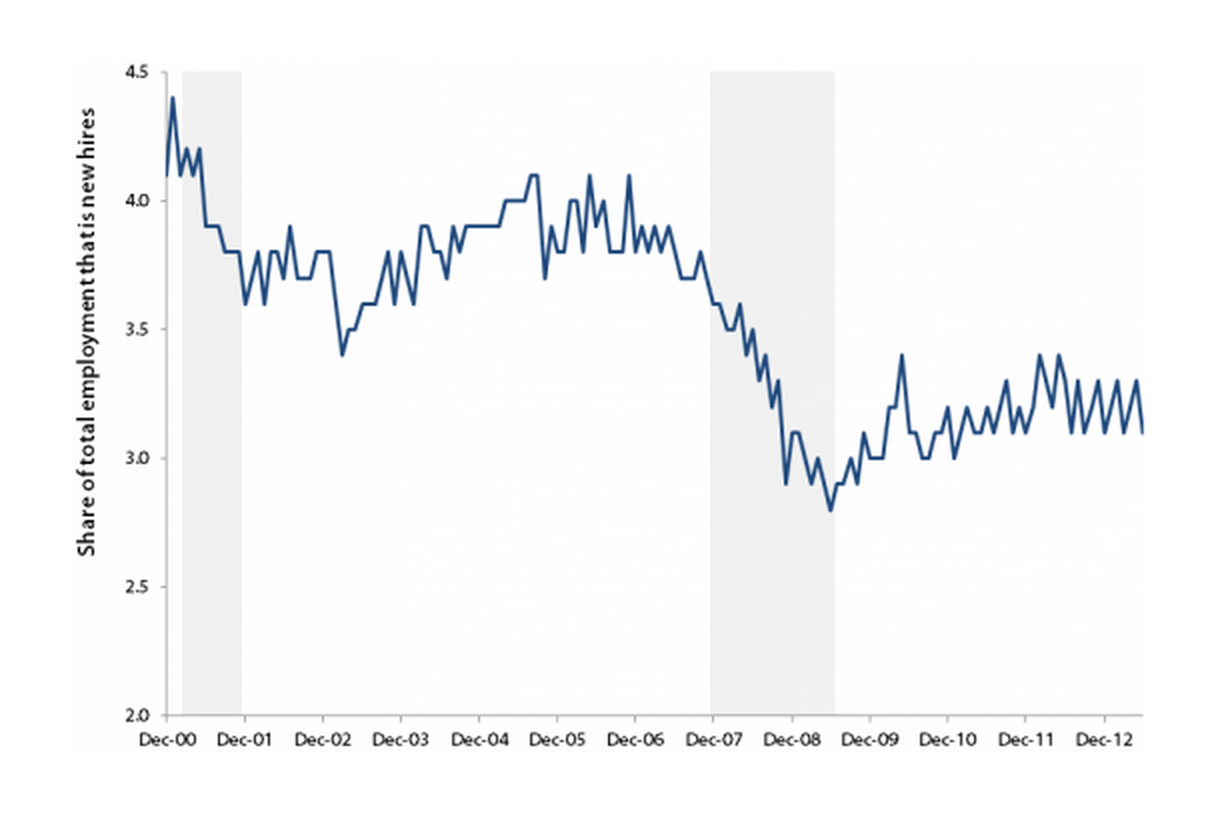 The JOLTS data are a regular reminder that there is always a great deal of “churn” in the labor market. When we learn, as we did last Friday, that the labor market added 162,000 jobs in July, it is important to remember that this is a net change, which masks a lot of shuffling. Over the last year, an average of 4.3 million workers were hired every month and an average of 4.2 million workers either left their jobs voluntarily or were laid off every month. These hires and separations numbers, however, are currently very low; when the labor market is stronger, there is much more churn. For example, in 2006 and 2007, there were 5.3 million people being hired and 5.1 million people separating from their jobs (i.e., leaving their jobs or being fired) each month on average.

The reason there is less churn today is that job opportunities are so scarce that employed workers are much less likely to quit the job they have. In 2006 and 2007, nearly 3 million workers voluntarily quit their jobs each month. That dropped to a low of 1.6 million in September 2009. It has since increased somewhat, but is still extremely low. In June, 2.2 million workers voluntarily quit their jobs, a decline of 73,000 from May. Because leaving a job for a better opportunity can be an important way for workers to advance, this persistent depressed rate of voluntary quits represents millions of lost opportunities.

Job openings were essentially flat in June, increasing by 29,000 to 3.9 million, following an upward revision of 79,000 to the May data. Job openings are improving slowly and remain very depressed. In 2007, there were 4.5 million job openings each month, so June’s level of 3.9 million is more than 12 percent below its prerecession level. The job openings data are extremely useful for diagnosing what’s behind our sustained high unemployment. In today’s economy, unemployed workers far outnumber job openings in every major sector, as shown in Figure B. This demonstrates that the main problem in the labor market is a broad-based lack of demand for workers—not, as is often claimed, available workers lacking the skills needed for the sectors with job openings.

Number of unemployed far outstrips number of available jobs across the board: Unemployed and job openings, by industry (in thousands) 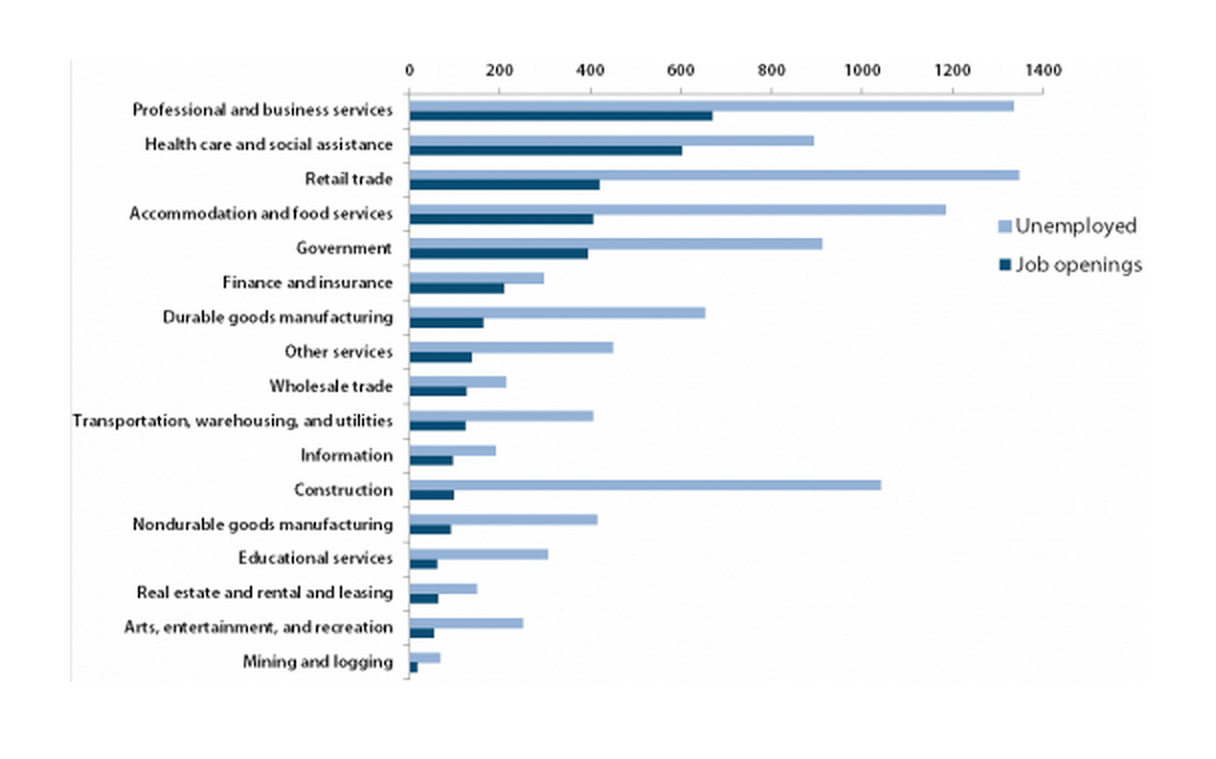 Note: Due to the fact that the data are not seasonally adjusted, these are 12-month averages, July 2012–June 2013.

Source: EPI analysis of data from the Job Openings and Labor Turnover Survey and the Current Population Survey

In June, the total number of job seekers, which increased by 17,000 from May, was 11.8 million (unemployment data are from the Current Population Survey and can be found here). The “job-seekers ratio”—the ratio of unemployed workers to job openings—was unchanged in June at 3.0-to-1. The ratio has been 3.0-to-1 or greater since October 2008, more than four-and-a-half years ago. A job-seekers ratio of 3-to-1 means there are no jobs for two out of three unemployed workers. To put today’s ratio of 3.0-to-1 in perspective, the highest the ratio ever got in the early 2000s downturn was 2.9-to-1 in September 2003. In a labor market with strong job opportunities, the ratio would be close to 1-to-1, as it was in December 2000 (when it was 1.1-to-1).

— With research assistance from Hilary Wething and Alyssa Davis