That’s why we decided to sum up what we think are the top five Valentine’s Day gifts ideas for working people across the country.

Our economy is out of balance. Corporations and CEOs hold too much power and wealth, and working people know it. Workers are mobilizing, organizing, protesting, and striking at a level not seen in decades, and they are winning pay raises and other real change by using their collective voices.

But, the fact is, it is still too difficult for working people to form a union at their workplace when they want to. The law gives employers too much power and puts too many roadblocks in the way of workers trying to organize a union. The Protecting the Right to Organize (PRO) Act will go a long way toward restoring workers’ right to join together to bargain for better wages and working conditions by streamlining the process when workers form a union, ensuring that they are successful in negotiating a first agreement, and holding employers accountable when they violate labor law. The U.S. Senate should join the House of Representatives and pass the PRO Act in order to restore power to working people.

The real (inflation-adjusted) minimum wage is now roughly 30 percent lower than it was in 1968, and it has been more than 10 years since congress raised the minimum wage—the longest stretch in history. To end this shameful streak, it is incumbent upon the Senate to take up and pass the Raise the Wage Act immediately. Raising the federal minimum wage to $15 by 2025 would lift wages for 33.5 million workers across the country—more than one-fifth of the wage-earning workforce. The increase would boost total annual wages for these low-wage workers by $92.5 billion, lifting annual earnings for the average affected year-round worker by $2,800. Recent survey data have shown that 74% of U.S. workers live paycheck to paycheck. Policymakers should give working people the ability to make ends meet—but also the ability to treat themselves occasionally.

Failure to raise the federal minimum wage has taken thousands of dollars out of the pockets of minimum wage workers: The real value of the minimum wage (adjusted for inflation) is 17% less than 10 years ago and 31% less than in 1968 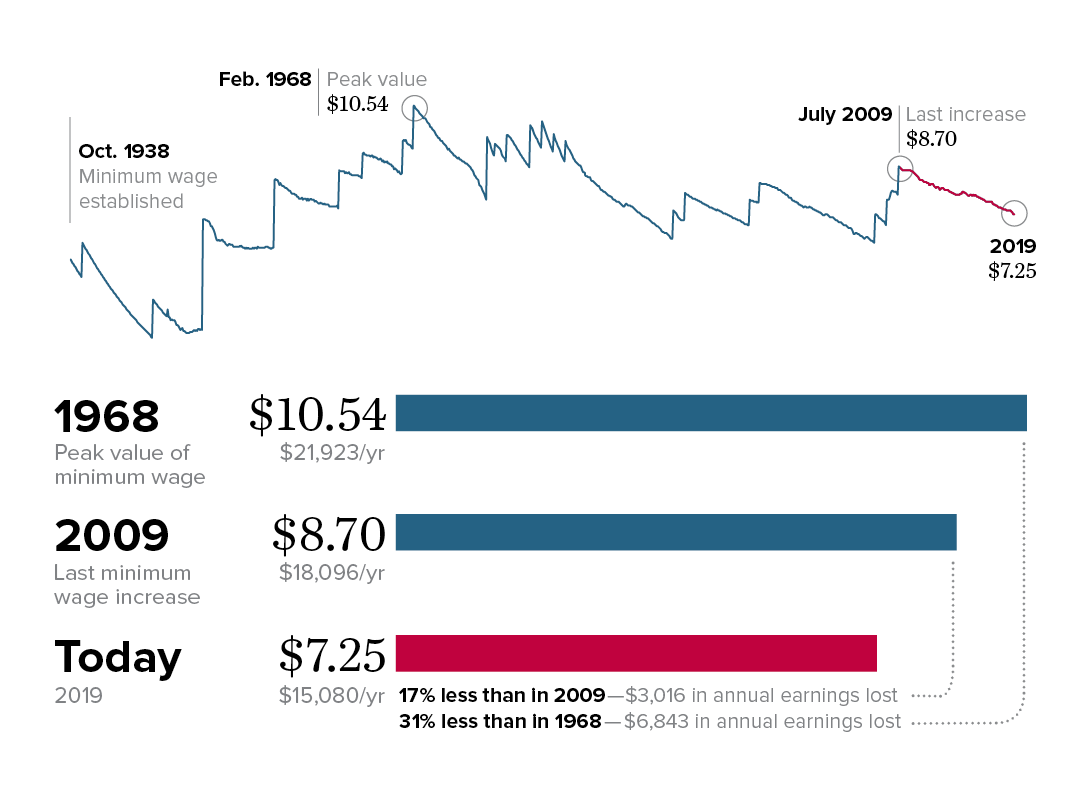 Note: All values are in June 2019 dollars, adjusted using the CPI-U-RS.

Source: Adapted from Figure C in David Cooper, Elise Gould, and Ben Zipperer, Low-Wage Workers Are Suffering from a Decline in the Real Value of the Federal Minimum Wage, Economic Policy Institute, August 2019).

Pay workers for their hours worked, or give them their time back

The U.S. Department of Labor announced in September its final overtime rule, which will set the salary threshold under which salaried workers are automatically entitled to overtime pay to $35,568 a year. The rule leaves behind millions of workers who would have received overtime protections under the much stronger rule, published in 2016, that Trump administration chose to abandon. A stronger overtime protection would pay more workers for working more than 40 hours a week, or allow them extra time with their families.

Let your workers move on

At least 36 million workers—27.8% of the private-sector workforce—are required to enter noncompete agreements. Noncompete agreements are employment provisions that ban workers at one company from going to work for, or starting, a competing business within a certain period of time after leaving a job. Establishments with high pay or high levels of education among workers are more likely to use noncompetes, but noncompetes agreements are also common in workplaces with low pay and low levels of education. More than a quarter (29.0%) of private-sector workers with an average hourly wage below $13.00 require noncompetes for all their workers. Noncompetes are part of a disturbing trend of employers requiring workers to sign away their rights. Noncompetes may be contributing to weak wage growth, given that changing jobs is how workers often get a raise. And given that noncompetes limit the ability of individuals to start businesses or take other jobs, it also is not difficult to see that noncompetes may be contributing to the declines in dynamism in the U.S. labor market. Congress should pass the bipartisan legislation, the Workforce Mobility Act of 2019, to prohibit noncompete agreements. 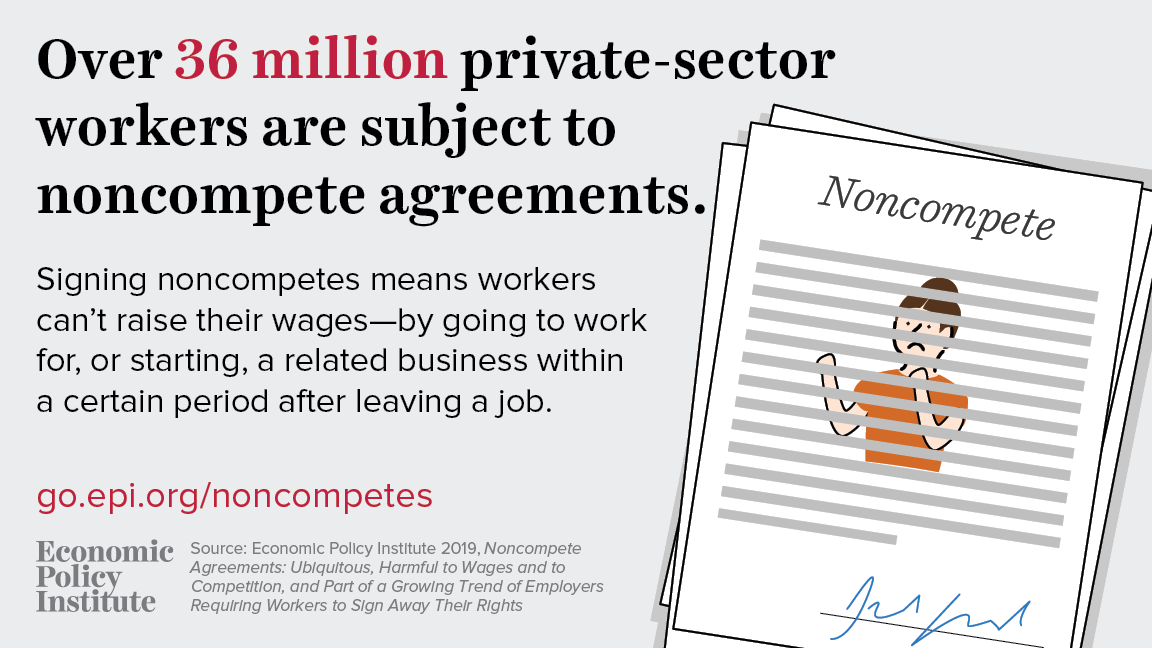 The General Counsel of the National Labor Relations Board recently released a memo claiming that Uber drivers are independent contractors, not employees of Uber. The reality is that these drivers have very little entrepreneurial freedom: Drivers can’t raise revenues because they can’t control prices or expand their customer base through marketing. Unlike a typical enterprise, Uber drivers do not build earnings as they get more experience. Uber drivers are not able to choose their customers—drivers are penalized for rejecting or not accepting trips. And after accounting for Uber’s commissions and fees and vehicle expenses, and taking into account the cost of a modest package of health insurance and other benefits equivalent to those earned by W-2 workers, Uber drivers earn the equivalent of $9.21 in hourly wages—less than what is earned by 90% of all other wage and salary earners, and below the minimum wage in 13 of the 20 major urban markets where Uber operates.

Recently, AB5 went into effect in California, a set of protections aimed at combatting the misclassification of workers as independent contractors, helping ensure that California’s employees have access to basic labor and employment protections denied to independent contractors including: minimum wage and overtime protections, paid sick days and family leave, workers’ compensation benefits, and unemployment insurance benefits. Policymakers across the country should take notice and provide similar protections to workers in their states. 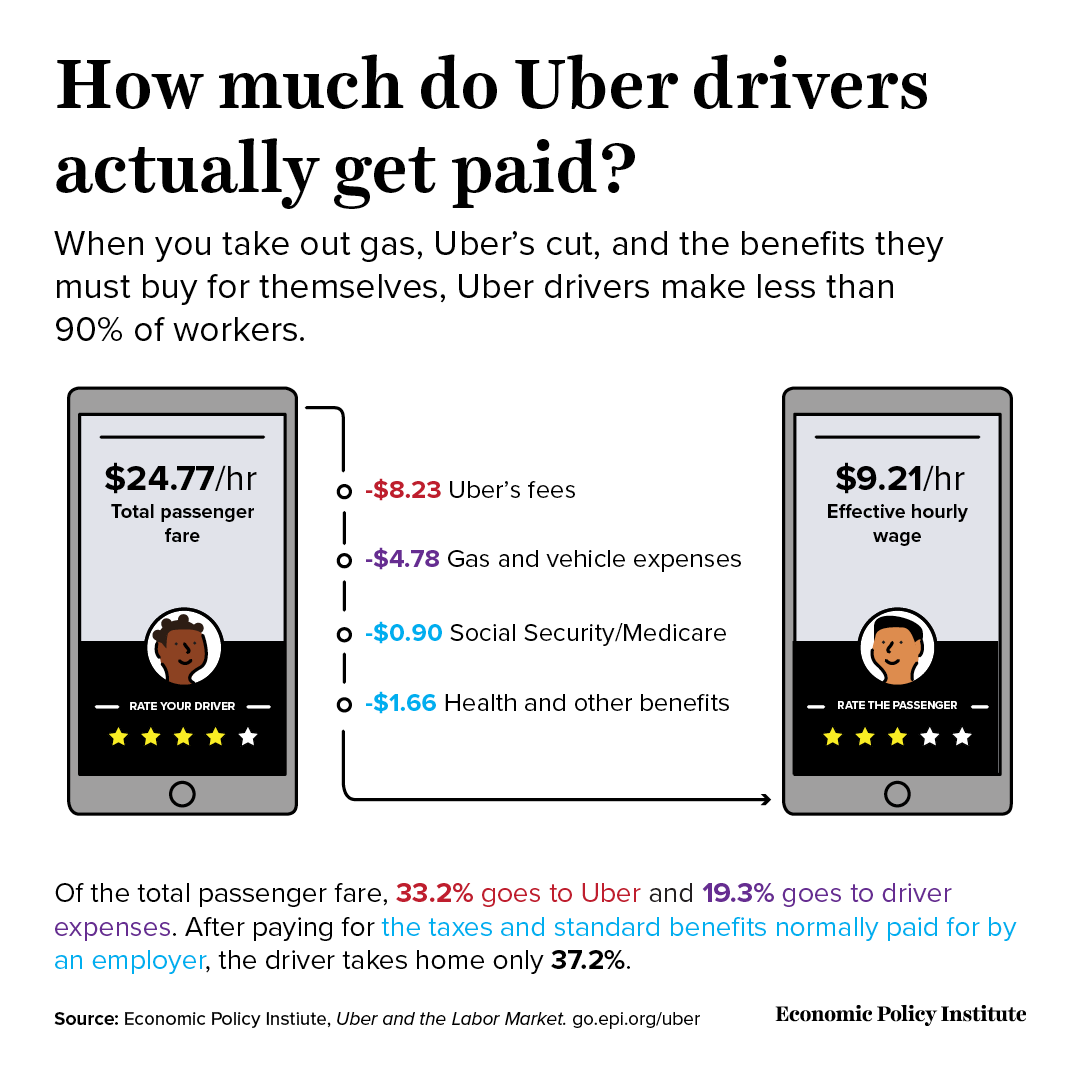