Part of the series Labor Day 2019: How Well Is the American Economy Working for Working People?

While the unemployment rate remains at historic lows and the labor market continues to tighten, wage growth has remained below target levels and has indeed showed some signs of slowing in the first half of 2019.1 Over time, ever-tighter labor markets have been needed to generate a given pace of wage growth, in part because of the erosion of policy institutions and labor standards that support workers’ bargaining power and leverage when they negotiate over pay with employers.2 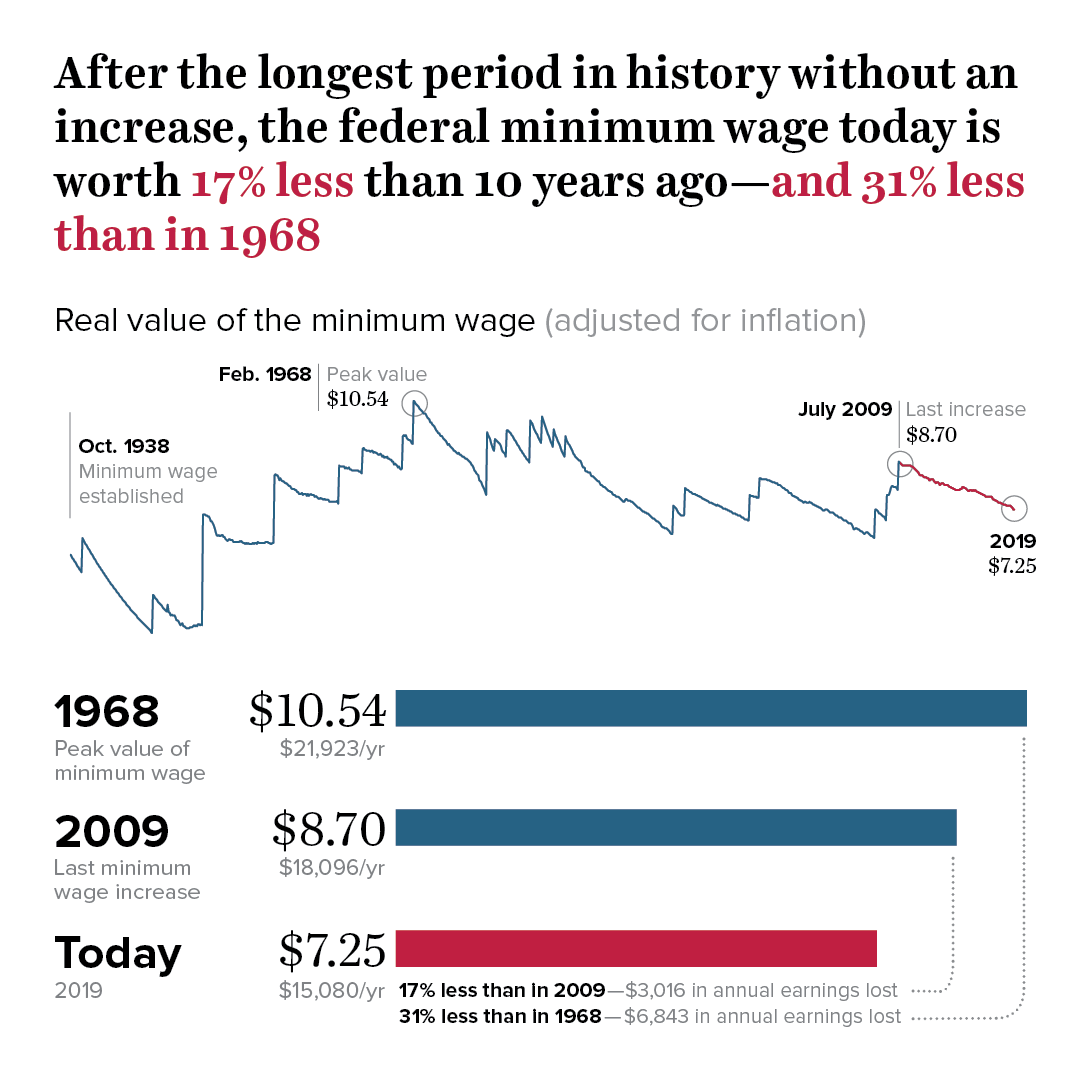 Note: All values are in June 2019 dollars, adjusted using the CPI-U-RS.

Even worse is that federal-minimum-wage-earning workers today are paid 31% less than the $10.54 an hour they would have been paid in 1968, when the minimum wage reached its highest (inflation-adjusted) value. More concretely, full-time workers at the federal minimum wage earn $6,800 less per year in real wage income compared with their counterparts five decades ago. This has happened even as labor productivity has essentially doubled over the last 50 years: The amount of goods that can be produced (or services that can be provided) in an hour of work has grown to twice what it was, yet workers’ pay has not.5

But there are still important differences among the states that have raised their minimums above the federal level. In eight of these states, the increases have been too infrequent and small to stay ahead of the rising cost of living. That leaves just 21 states (and the District of Columbia) where the inflation-adjusted minimum wage actually rose in value between 2010 and 2018 (see Figure B).

Note: States in blue have positive real minimum wage increases between 2010 and 2018, after adjusting for inflation using the CPI-U-RS.

Wages for low-wage workers rose faster in states with real minimum wage increases: Change in the 10th percentile real wage in each state group between 2010 and 2018, overall and by gender

With the goal of further boosting earnings and reducing wage inequality, seven states and 31 cities and counties have enacted legislation that will raise their minimum wages to at least $15 per hour over the next few years. Yet in the absence of federal action or additional state action, 23.2 million workers will still be paid less than $15 per hour in 2025.7 Among these would be a disproportionate share of black workers, since black workers are not only overrepresented among low-wage workers, but they are also less likely to live in states that have passed a minimum wage that is higher than the current federal minimum.8

Conclusion: We need to raise the federal minimum wage to lift up low-wage workers

The minimum wage is a key policy needed to reverse decades of downward pressure on the wages of low-wage workers. A $15 minimum wage by 2025, as outlined in the Raise the Wage Act of 2019 recently passed by the U.S. House of Representatives, would raise wages for a total of 33.5 million workers.9 The Act would also set the minimum wage to update automatically each year to reflect wage growth for middle-wage workers, thus preventing erosion in the value of the minimum wage and stopping the growth in inequality between workers in the middle and those at the bottom of the wage scale.10

2. Josh Bivens and Ben Zipperer, The Importance of Locking in Full Employment for the Long Haul, Economic Policy Institute, August 21, 2018.

4. The nominal value is the actual dollar amount.

6. Josh Bivens and Ben Zipperer, The Importance of Locking in Full Employment for the Long Haul, Economic Policy Institute, August 21, 2018.

8. Valerie Wilson, The Raise the Wage Act of 2019 Would Give Black Workers a Much-Needed Boost in Pay (economic snapshot), Economic Policy Institute, February 2019.

10. Automatic adjustments to the federal minimum wage are described in our February 2019 analysis of an earlier iteration of the Raise the Wage Act. See David Cooper, Raising the Federal Minimum Wage to $15 by 2024 Would Lift Pay for Nearly 40 Million Workers, Economic Policy Institute, February 2019.