Math problems at the Education and Workforce Committee

The system-wide budget for the University of Tennessee is more than $2 billion a year. Rep. Phil Roe (R-Tenn.) claims that the new Department of Labor overtime rule, which requires time-and-a-half overtime pay for many salaried employees earning less than $47,476 a year, will add $9 million in new costs. This is less than half of 1 percent of the annual budget, yet Rep. Roe claims this will force a 2 percent tuition increase. That does not add up.

State appropriations to higher education have been stagnant or declining for several years… Higher education has responded to the decline in state appropriations by increasing tuition, providing no salary increases to faculty and staff, not filling or eliminating vacant positions, and becoming more efficient in the delivery of instruction, research, and public services.

In 2014, for example, tuition for various classes of in-state and out-of-state students increased between 2 and 6 percent, even though salaries were frozen. The drivers of rising tuition costs have nothing to do with Department of Labor regulations. But with appropriations shrinking, one can imagine that the desire of university officials to get uncompensated overtime work from its employees is increasing, and the updated DOL rules will provide significant protection from excessive overwork.

Budgets are always a statement of priorities, and one can question the priorities of the University of Tennessee, which has frozen faculty and staff salaries—except in the athletic department. In 2013, the university announced a 9.1 percent increase in athletic department salaries, which included a $2.95 million salary for football coach Butch Jones. How much is Coach Jones paid today? According to USA Today, he gets a phenomenal salary of $3.61 million—a 22 percent increase in three years.

And yet, Rep. Roe says Tennessee is too strapped to pay postdoctoral researchers doing cutting edge biomedical research enough to push them over the exemption threshold of $47,476, which would allow the university to continue requiring them to work 55 hours a week or more without overtime pay. Or to pay a food services manager earning $30,000 to $40,000 a year anything for her overtime hours.

I don’t have a complete list of athletic department salaries, but here is a list of the already extravagant top salaries at the University of Tennessee that knoxnews.com published in July 2013: 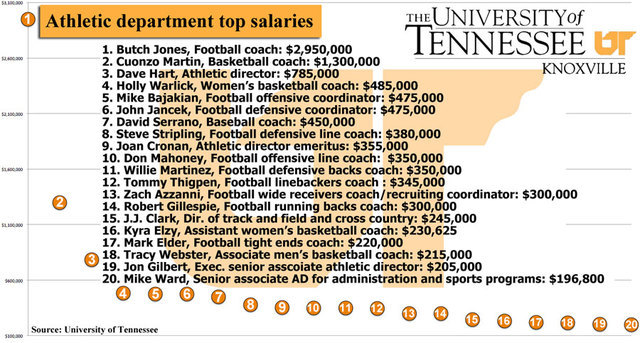 Oh, did I mention that one other group at the University of Tennessee has escaped pay freezes? It was announced in October 2015 that the university president Joe DePietro and chancellor Jimmy Cheek would both receive substantial salary increases and bonus deals:

The University of Tennessee Board of Trustees has approved bonuses and raises for administrators, including the campus chancellors and UT President Joe DiPietro.

The Knoxville News Sentinel reports at a Friday meeting, the board approved a new compensation package for DiPietro through 2019. It includes 5 percent annual base pay increases if his performance is satisfactory to the board. It also includes annual bonuses of up to 25 percent of base pay and increases in housing and expense allowances.

In total DiPietro will receive up to $696,802 in compensation this year as well as $186,301 in retention bonuses for his performance the past three years.

The board also approved new annual performance-based retention bonuses for all board-elected university officers. The maximum payout will be 15 percent of base salary, except for DiPietro.

Rep. Roe is looking for the cause of higher tuition in all of the wrong places.