As COVID-19 outbreaks spread through meatpacking plants across the country last March, Félicie Joseph and her co-workers at the Tyson Foods pork processing plant in Waterloo, Iowa, were forced to work without protections. Workers stood elbow-to-elbow, most without masks, although some used bandanas, old t-shirts, or even sleep masks as makeshift protection. Even when her supervisor started coughing—and even when she fell ill—Joseph kept showing up for work. It was widely accepted among workers that skipping a shift likely meant losing one’s job. That was something that neither Joseph nor the relatives back in Haiti who depended on her could afford. With little bargaining power to force Tyson to enact safety precautions, Joseph put her life on the line and ended up paying the ultimate price. 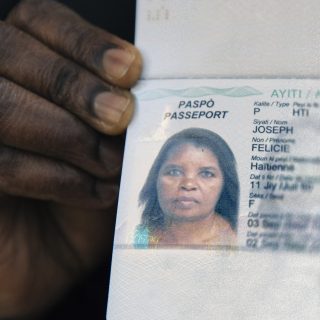 The Tyson Foods pork plant in Waterloo, Iowa, was home to one of the worst COVID outbreaks in the country in 2020. According to Black Hawk County officials, at least 1,500 workers at the plant—more than a third of the workforce—had contracted the virus by December. Eight workers had died.

An extensive investigation by journalists Bernice Yeung and Michael Grabell at ProPublica found that meatpacking workers like Félicie Joseph put their lives on the line because they lacked the bargaining power enjoyed by meatpacking workers—indeed workers overall— in earlier decades:

Across the country, workers had been losing leverage against companies for decades. Workplace safety rules had been targeted by Reagan-era deregulation. Unionism was in a downward spiral. And in meatpacking, corporate power had grown with industry consolidation, forcing the once-mighty packinghouse workers union to merge with less fiery labor groups that also represented other industries.

Waterloo was once home to a powerful union and the largest packing house in the country paying workers in the 1960s wages that were the equivalent of $24–$32 per hour today.

But by the time Félicie Joseph arrived at the plant in 2017, those high wages were an historical relic. The old Rath Packing Company had long closed and the main employer was now Tyson. Skilled and semi-skilled meat cutting jobs had long been replaced with largely automated operations staffed by low-wage workers moving whole animal carcasses down an assembly line at dangerously high speeds.

Joseph joined a workforce that was vulnerable by design. Positions were filled by bringing in immigrants and refugees from all over the world. Their statuses, experiences, and language barriers made them less likely to complain of exploitation. Joseph, an immigrant from Haiti, made her way to northern Iowa after losing her job processing vegetables in Florida. Because she didn’t speak English, she was having trouble finding work there.

When COVID hit Waterloo, it was a perfect storm bringing peril to Joseph and her coworkers.

A lawsuit filed by the family of a Tyson worker who died of COVID-19, alleged that as the virus tore through the plant, Tyson required its employees to work long hours in cramped conditions without implementing safety measures or providing workers with essential personal protective equipment.

According to ProPublica, county public safety and health officials visiting the plant found “workers were standing elbow-to-elbow and across from one another. Only about a third wore face coverings. Some had fashioned masks out of bandanas and old T-shirts. One wore a sleep mask designed to cover eyes.”

As safety threats multiplied, the system was no longer set up to handle them. The “system of swift reporting and next-day inspections” in meatpacking plants had long since broken, according to one report. And when federal Occupational Safety and Health Administration (OSHA) inspectors did show up at the Waterloo plant, they left without taking action, hamstrung by a lack of regulations directly addressing COVID-19 and messages from higher ups to give companies the benefit of the doubt.

At the same time, workers were afraid to call in sick. As a health official in another town with a Tyson’s plant told reporters Yeung and Grabell, workers in the meatpacking industry “are well groomed to the expectation of working when ill to avoid punitive retaliation.”

So it is not a surprise that when Félicie Joseph got a sore throat and her muscles started to ache, she ignored a co-worker’s advice to skip her next shift and see a doctor. Joseph feared that if she didn’t show up to her job cutting up hog parts, she could be fired—something that Joseph and her 10 relatives back in Haiti who depended upon her wages could ill afford. Besides, Joseph’s own boss had been coughing for days but kept working anyway, so she would do the same thing, she said.

When a COVID-19 diagnosis later forced her to quarantine at home, she spent her days fearing that Tyson would fire her. Finally, on day 14 of her quarantine and unable to breathe, Joseph allowed a friend to call an ambulance. She died on the way to the hospital.

In the ultimate sign of a disregard for life—and the inherent cruelty of a system where workers don’t have the power to protect their own health and safety—managers at the facility reportedly took bets on the number of workers who would contract the virus.

While the managers involved were ultimately fired, that gives company executives an opportunity to say what happened at the plant was just a result of a few bad apples, warns a local community organizer.

“It’s just a game that they play,” Alejandro Ortiz, a community organizer with American Friends Service Committee Iowa and Iowa Justice For Our Neighbors, told The Courier, a daily newspaper in Waterloo.

Unfortunately, a deadly game for workers.

Sydney Czyzon, “Workers at the Tyson Plant in Waterloo Kept Getting COVID-19. Where Was Their Union?” Courier, January 2, 2021.

Bernice Yeung and Michael Grabell, “Meatpacking Companies Dismissed Years of Warnings but Now Say Nobody Could Have Prepared for COVID-19,” ProPublica, August 20, 2020.

Photo by Taylor Glascock for ProPublica