With the Bush-era tax cuts set to expire at the end of 2012, the Obama administration has pushed to extend the tax cuts for all but the top 2 percent of filers. One under-examined feature of the cuts is their disproportionate cut in tax rates on income derived from wealth. Currently, most long-term capital gains and dividends face a top rate of 15 percent, much lower than the overall top marginal rate applied to wages and salaries.This increasingly benefits the wealthiest filers.

Inequality, exhibit A: Walmart and the wealth of American families

The last month has seen both the 50th anniversary of the opening of the first Walmart and the release of Federal Reserve data on family wealth from the Survey of Consumer Finances (SCF). The report showed the median wealth of American families fell by 38.8 percent between 2007 and 2010. In “Inequality, exhibit A: Walmart and the wealth of American families,” EPI Research and Policy Director Josh Bivens drew attention to the growing disparity between the wealth the typical family holds and the staggering wealth of the nation’s richest families. “In 2010, as the Waltons’ wealth has risen and most other Americans’ wealth declined, it is now the case that the Walton family wealth is as large as the bottom 48.8 million families in the wealth distribution (constituting 41.5 percent of all American families) combined,” wrote Bivens.

Media outlets, including the Huffington Post and the Los Angeles Times, have cited Bivens’s article to reveal just how drastic economic inequality has become.

EPI continues to be the premier resource for reporters searching for the latest wage trends and for effective policies to boost both national and state economies.

Krugman wrote: “I see from some of the comments that there’s a widespread belief that the wage stagnation we’ve experienced under ‘modern capitalism’ is some kind of illusion, that it would go away if we took benefits into account. Nope: 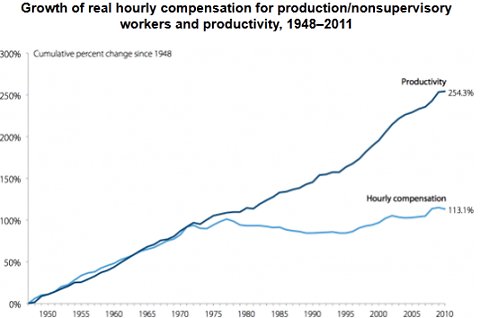