The economy President-elect Biden is inheriting: More than 26 million workers—15.5% of the workforce—are being directly hurt by the coronavirus downturn

Today was, perhaps astonishingly, the last jobs report of 2020. It’s a moment to take stock of where things stand after the first 11 months of 2020 and the first 9 months of the COVID-19 economic shock.

The Bureau of Labor Statistics (BLS) reported that the official number of unemployed workers in November was 10.7 million, and the unemployment rate was 6.7%. The official number of unemployed workers, however, is a vast undercount of the number of workers being harmed. In fact, 26.1 million workers—15.5% of the workforce—are either unemployed, otherwise out of work due to the pandemic, or employed but experiencing a drop in hours and pay. Here are the missing factors:

Adding up all except the last quantity above, that is 10.7 million + 0.6 million + 2.7 million + 5.0 million = 19.0 million workers who are either officially unemployed or otherwise out of the labor force as a result of the virus. Accounting for these workers, the unemployment rate would be 11.2%. Also adding in the 7.1 million who are employed but have seen a drop in hours and pay because of the pandemic brings the number of workers directly harmed in November by the coronavirus downturn to 26.1 million. That is 15.5% of the workforce. 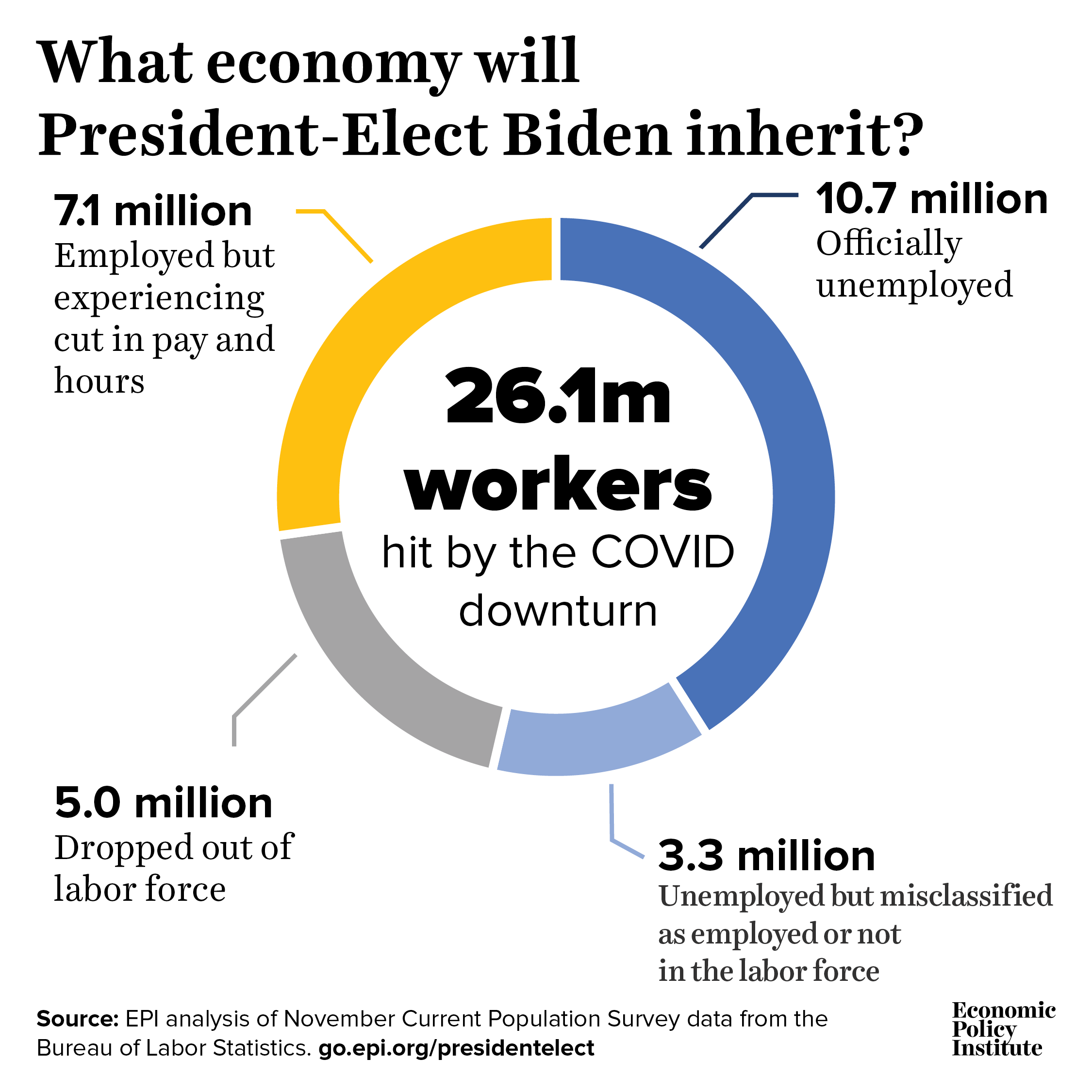 Finally, even the 26.1 million is an undercount. For one, it doesn’t count those who lost a job or hours earlier in the pandemic but are back to work now. The cumulative impact would be much higher. But perhaps more importantly, the 26.1 million is a drastic undercount because it ignores the fact that even workers who have remained employed and have not seen a cut in hours are being hurt by the recession. How? Essentially the only source of power nonunionized workers have vis-à-vis their employers is the implicit threat that they could quit their job and take another job elsewhere. Case in point: One of the most common ways nonunionized workers get a wage increase is by getting another job offer for higher pay—they either accept the new job, or their current employer gives them a raise in response to their outside offer. When job openings are scarce, as they are now, workers’ leverage dissolves. Employers simply don’t have to pay as well when they know workers don’t have as many outside options.

All this means that stimulating the economy to create jobs is crucial—both to the 26.1 million workers who are being directly harmed by the recession because they are either out of work or have had their hours and pay cut, and to the millions more who saw their bargaining power disappear as the recession took hold. This is a preventable disaster for the workers of this country. Extending the unemployment insurance (UI) provisions of the CARES Act and providing fiscal aid to state and local governments could alone create or save millions of jobs over the next year (just the pandemic UI provisions could create or save 5.1 million jobs). To get the economy back on track in a reasonable timeframe, we need policymakers to pass roughly $3 trillion in fiscal support now, with the first $2 trillion hitting the economy between now and mid-2022. However, Senate Majority Leader Mitch McConnell has so far blocked additional meaningful COVID-19 relief. As the country faces slowing job growth and a resurgent virus, it is outright economic sabotage to block emergency relief when millions are depending on it most. McConnell cannot continue to stand in the way of desperately needed relief.