Monthly job growth over the past three months has averaged 540,000, a pace that would see the economy hit pre-COVID measures of labor market health by the end of 2022. While recovery can’t come soon enough for U.S. workers, if we do hit this target of pre-COVID labor market health by the end of 2022 it will constitute a recovery that is roughly five times as fast as that following the last downturn (the Great Recession of 2008–2009, when reattaining pre-recession unemployment rates took a full decade).

Despite this relatively cheery news, criticisms continue to be leveled against the American Rescue Plan (ARP) passed in March. Critics claim that the ARP provided too much fiscal support to the economy and will soon result in “overheating” (a pronounced uptick in wage and price inflation and rising interest rates). Some critics have pointed to the rapid wage growth in the leisure and hospitality sector (which includes restaurants) as evidence that the ARP created labor shortages.

Those arguing that the ARP and other policies have caused labor shortages have made two important claims: (1) wage growth is surprisingly strong given current jobless rates; and (2) this strong wage growth means labor shortages are slowing the pace of economic recovery and we could have had faster job growth with less ambitious fiscal support. However, the evidence for these claims is weak. Namely:

The rest of this post provides further details on these two main points.

Before the April jobs report was released, many expressing concern about incipient labor shortages pointed to the Atlanta Federal Reserve Wage Growth Tracker (AWGT) as evidence. The AWGT looks at the wages of people employed at dates 12 months apart and calculates the change in their wages over that time. Because it calculates wage growth for the same individuals one year apart, it is free from the problem of “composition bias”—when the average wage moves because employment changes at different rates for workers in different jobs with different wage levels.

This composition bias has been a particular problem for measuring wage growth following the COVID-19 shock. Because low-wage workers were far more likely to lose their jobs due to this shock, this had the perverse effect of raising average wages in the wake of the employment collapse. The Bureau of Labor Statistics continues to warn against trying to make strong inferences about wage growth over recent periods because of this bias, explaining this in their latest employment situation report: “However, because average hourly earnings vary widely across industries, the large employment fluctuations since February 2020 complicate the analysis of recent trends in average hourly earnings.”

Because composition adjustments made standard measures of wage growth hard to interpret earlier in 2021, many pointed to the AWGT as an indicator that was free of this problem and argued that it represented a better measure of labor market tightness. They often highlighted figures like Figure A below as evidence that wage growth following the COVID-19 shock was stronger than expected, particularly when compared with the large decline in wage growth following the Great Recession.

Notes: The average wage growth of the last six months before the previous business cycle peak is set to 100. Wage growth for the next 15 months is expressed as a share of this pre-recession pace. This method of calculating the deceleration normalizes the decline in wage growth by the baseline path that existed before the shock.

If composition-adjusted wage growth is not unusually strong at this point in the recovery from the COVID-19 recession, there is little reason to think labor shortages and excess wage growth are weighing down employment growth. Recent employment growth should, in turn, be relatively predictable with some economic “fundamentals.”

In the recovery from the COVID-19 shock, the most fundamental determinant of employment growth is the state of reopening following restrictions adopted for public health reasons during the COVID-19 pandemic. Restrictions may have been formal policies or may have been informal decisions made by the public in response to fears about the virus; they clearly hit some industries far harder than others, and the bounce-back from the lifting of these restrictions has been far stronger in these industries.

Figure C shows the relationship between the change in employment between February 2020 and December 2020 and the change in employment between December 2020 and April 2021, by industry. There are 28 observations—one for production/nonsupervisory workers and one for nonproduction/supervisory workers in each of the 14 major private-sector industries. It shows that employment growth so far in 2021 is very well predicted by the size of the jobs deficit from the COVID-19 shock. This pattern suggests that job growth by industry is overwhelmingly predicted by post-COVID-19 reopening. Notably, this pattern holds in the oft-cited leisure and hospitality sector, which has seen employment growth above the trend line predicted by the overall relationship between 2020 job losses and subsequent employment gains. 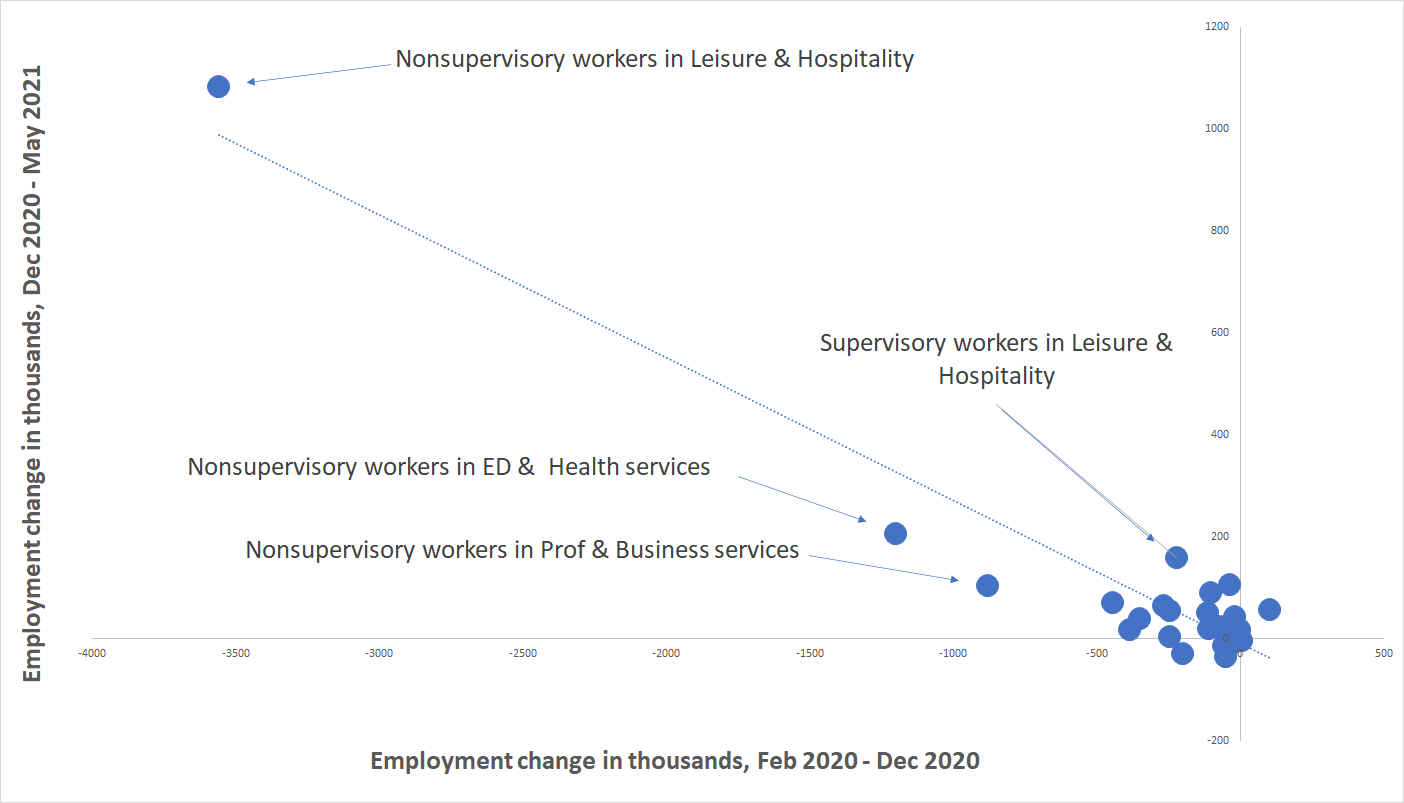 Source: Authors’ analysis of data from the Current Employment Statistics (CES) program of the Bureau of Labor Statistics.

In short, there is very little unusual to “explain” about job growth in this sector; it suffered enormous losses in the first wave of COVID-19 and is coming back at a rapid pace. Evidence that anything—like labor shortages pushing up wages too rapidly—is holding back job growth in this sector is lacking. Instead of a shortage, this looks like a relatively brisk adjustment to a large and positive demand shock.

The U.S. labor market is in extremely rapid flux. The COVID-19 shock was short but incredibly sharp—with 22 million jobs lost in just two months. Restarting the huge swaths of the economy that came to a shuddering halt in those months was always going to be rocky. But the policy approach taken during this restart has been solid: It has prioritized families’ need for income and ensured that shortfalls of spending don’t spill over into sectors not directly affected by COVID-19. So far, the results have been strong, with job growth since December 2020 strong enough to see unemployment fall below 4% by the middle of 2022. Concerns that this approach has instead led to damaging labor shortages and “overheating” are not supported by data.