For retail workers, a losing battle against Wall Street

Bruce Miller spent nearly 40 years working for Sears repairing cars but ended up being forced to go from an hourly employee with good pay and benefits to commission-based after a hedge fund took over the iconic retailer. Despite the financial upheaval and a decline in working conditions, he couldn’t leave his Sears job without jeopardizing benefits he’d spent years accumulating. The takeover of Sears by ESL Investments, a hedge fund controlled by Eddie Lampert – and the focus by such funds to maximize shareholder profits above all else – is a clear case of why workers like Miller have unequal power in the workplace. ESL held all the bargaining cards. 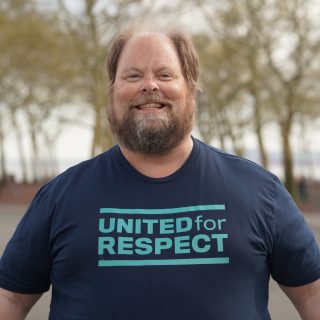 Bruce Miller’s job at Sears got worse almost as soon as the retailer was taken over by a hedge fund. Miller had gone to work at the Sears in Toms River, NJ right after high school and had stayed for nearly four decades, making a career out of repairing cars. But that all changed when Sears was sold as part of a complex merger in 2004. Business at the Sears Auto Center dwindled and the store became increasingly dilapidated. Miller and his co-workers went from hourly employees to being paid on commission, meaning that they now had to compete against one another for business. Benefits were cut, while his steady schedule became increasingly unpredictable.

Miller went to work at Sears because of its reputation for taking good care of its employees. Now that compact was being shredded before his eyes. Still, he was reluctant to leave. While there were other auto repair shops in coastal New Jersey, none paid the sort of middle-class wages and benefits that Sears was known for. Bruce had spent half his life working for the company and had planned on staying until he retired—with a pension. Leaving now would mean losing the benefits his years of service entitled him to, and a reduced standard of living when he couldn’t work anymore. And so he stayed on, hoping that things would improve.

Miller was able to hold onto his job until Sears declared bankruptcy in 2018, and his store closed its doors for good. But his ability to bargain with his employer all but evaporated after Sears’ takeover. As power shifted away from a retailer known for treating employees well, and towards a hedge fund focused on returning value to shareholders, the pay, benefits and working conditions of Miller and his coworkers drastically deteriorated.

The takeover of Sears by ESL Investments, a hedge fund controlled by Eddie Lampert, was one part of a massive retail merger. Lampert used the retail giant KMart to purchase Sears, arguing that the deal would help the companies compete against Walmart, which had eclipsed both retailers and was eroding their market share. But while the story of Sears’ fall from one-time retail giant is uniquely complicated—Eddie Lampert, the head of ESL Investment, the company’s chief lender, was also the CEO of Sears and as its chairman—the phenomenon of retailers going bankrupt after being saddled with debt by private equity firms is an increasingly common one.

Toys ‘R’ Us, which filed for bankruptcy in 2017, was backed by a trio of private equity and investment firms. Also on the list: Payless ShoeSource, Radio Shack, and popular mall-based retailers, the Limited, Wet Seal, Claire’s and Aeropostale. For these retailers, already reeling from the rise of online shopping, their financial woes were greatly exacerbated by hedge funds and private equity firms that loaded them up with debt.

The financial strategy of the investment firms—slashing expenses, bloating balance sheets and increasing shareholder returns—also puts them on a collision course with the interests of retail workers. According to one report, more than one third of retail layoffs in 2016 and 2017 alone were thanks to private-equity ownership. “Hedge funds are systematically destroying jobs across the nation,” says Carrie Gleason, campaign manager for the worker advocacy group Rise Up Retail. “From Toys ‘R’ Us to Sears, these financial predators are extracting the value out of these retail establishments, forcing the closure of thousands of stores, and throwing tens of thousands of workers into the streets.”

“I lost my American dream—my income, my house, and my medical insurance—while Eddie Lampert and his hedge fund walked away with millions.”

Lampert and his hedge fund emerged from Sears’ bankruptcy largely unscathed, at least financially. The failure of Sears and other high-profile companies has raised harsh questions about the role played by investment firms in their demise. But more than bad headlines will be needed to redress imbalance between heavy-handed investors focused on short-term profits and the interests of workers. Rise Up Retail has called for such measures as giving workers seats on corporate boards in order to reign in executives, and mandating protections for retail workers whose companies get taken over by outside investment firms. New Jersey recently became the first state in the country to guarantee severance pay in the wake of mass layoffs.

The new law was inspired, in part, by the stories of workers like Miller. After 35 years as a Sears employee, he received just eight weeks of severance pay. As Miller wrote in a recent op-ed, “I lost my American dream—my income, my house, and my medical insurance—while Eddie Lampert and his hedge fund walked away with millions.”

Bryce Covert, “Retail Workers are More Vulnerable than Ever. A New Campaign Wants to Protect Their Jobs,” Vox, September 27, 2018.