COVID-19 reality: Putting your life on the line for a job

Coronavirus was racing through a McDonald’s franchise in Oakland, California, but Angely Rodriguez Lambert and her coworkers kept reporting for work, even as they fell ill. Illegally denied paid leave, the workers couldn’t afford to stay home, and were threatened with termination if they took time off. And with unemployment spiking amid the pandemic, quitting wasn’t an option. The McDonald’s workers had to put their lives on the line because they had no bargaining power to force their employer to enact safety precautions. 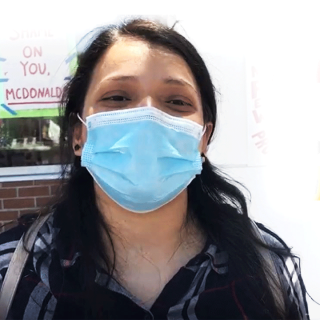 Angely Rodriguez Lambert was in the middle of her shift as a cashier at McDonald’s in Oakland, California, this spring when she started to feel sick. Her manager instructed Lambert to keep working. While the restaurant had installed protective barriers and provided safety gear for workers, it was not allowing the growing number of workers with COVID-19 symptoms to stop working. Nor were workers being told when their coworkers tested positive. If no one could cover their shift, employees were expected at work, symptomatic or not.

Rodriguez later tested positive for COVID-19, along with nearly three dozen of her coworkers and their extended family members, including a 10-month-old child.

In a lawsuit filed in June, and an array of complaints filed with state and local health authorities, Rodriguez and her coworkers described a workplace that posed an imminent danger to employees and the surrounding community. As the virus roared through the franchise, Rodriguez and the other workers kept coming into work, because they couldn’t afford not to. With no sick time, missing work meant not getting paid—not an option for workers getting by on minimum wage. And with unemployment spiking amid the pandemic, quitting wasn’t an option either. Rodriguez feared that if she left her McDonald’s job she wouldn’t be able to find another one. While the company’s denial of paid sick time was illegal under the Families First Coronavirus Response Act enacted in March, the McDonald’s workers knew nothing about it.

“Imagine living here without any money,” Rodriguez told a reporter at the time. “I can’t stay in my home if I don’t pay the rent, and I need to eat and send money to my family.”

The dilemma faced by the Bay Area fast-food workers has been playing out in workplaces across the country: stay on the job in conditions that are potentially dangerous, even life-threatening, or quit to join an army of job seekers at a time of record unemployment. Workers who make the agonizing choice to continue working have little if any recourse when it comes to demanding stricter safety standards on the job. By the start of the pandemic, just 10% of American workers were represented by unions, which do provide workers with ways to demand protections at work. As a Harvard report on worker power in the age of COVID-19 concluded, the vast majority of workers have “no voice in the life-and-death decisions being made about how their work is carried out and the protections that they have in the workplace.”

“Imagine living here without any money. I can’t stay in my home if I don’t pay the rent.”

The absence of unions, coupled with the lack of enforcement of federal health and safety directives, has meant that companies have responded to the threat posed by COVID-19 to workers haphazardly, if at all. While the Occupational Safety and Health Administration (OSHA) issued guidance for preparing workplaces for the coronavirus, it is nonbinding. OSHA has also proven unwilling to punish employers for COVID-related health and safety abuses. While nearly 6,000 workers filed complaints in the first months of the pandemic, OSHA issued just a single citation—to a nursing home in Georgia that was slow to report hospitalizations from its facility. When Democrats pressed OSHA to issue an emergency rule that would force companies to comply with Centers for Disease Control (CDC) guidance for COVID-19, the agency refused.

The COVID crisis has revealed just how little bargaining power workers have, even in life and death situations. The cumulative impact of decades of legislation and court decisions aimed at eroding labor rights has profoundly shifted the balance of power away from workers and towards their employers. Even the range of occupations afforded basic labor protections has shrunk dramatically as employers have steadily replaced the ranks of full-time employees with contract laborers and gig employees who are not covered under many workplace-related laws.

But the pandemic has also emboldened workers to demand more say over their working conditions, including workplace safety. Rodriguez and her McDonald’s co-workers went on strike, forcing the business to shut down for weeks. The right to strike under the National Labor Relations Act covers nonunion employees—although workers still face significant risks of retaliation. Five employees then filed a public nuisance lawsuit, requesting a temporary restraining order that would keep the restaurant closed until the franchise owner complied with minimum health and safety standards, as well as paid sick leave laws.

A California state court recently sided with Lambert and her co-workers, ordering the Oakland McDonald’s to remain closed until it could demonstrate that it had enacted safety measures to protect its employees and the public. The conditions included tracing the contacts of anyone who was suspected of contracting COVID-19 at the restaurant.