Working Economics Blog
Posted November 6, 2020 at 11:43 am by Heidi Shierholz

What the next president inherits: More than 25 million workers are being hurt by the coronavirus downturn

Some of the most frequent questions I’ve gotten in the last few months are, “How many workers are being hurt by the coronavirus recession?” and “What kind of economy will the next president inherit?”

There is a huge amount of confusion about the number of workers impacted by this downturn because two major, completely separate, government data sets that address these questions are reporting very different numbers. Specifically, the Bureau of Labor Statistics (BLS) reported that the official number of unemployed workers in October, from the Current Population Survey, was 11.1 million. But during the reference week for the October monthly unemployment figure—the week ending October 17—the Department of Labor (DOL) reported that there were a total of 21.5 million people claiming unemployment insurance (UI) benefits in all programs. The UI number is compiled by DOL from reports it receives from state unemployment insurance agencies. 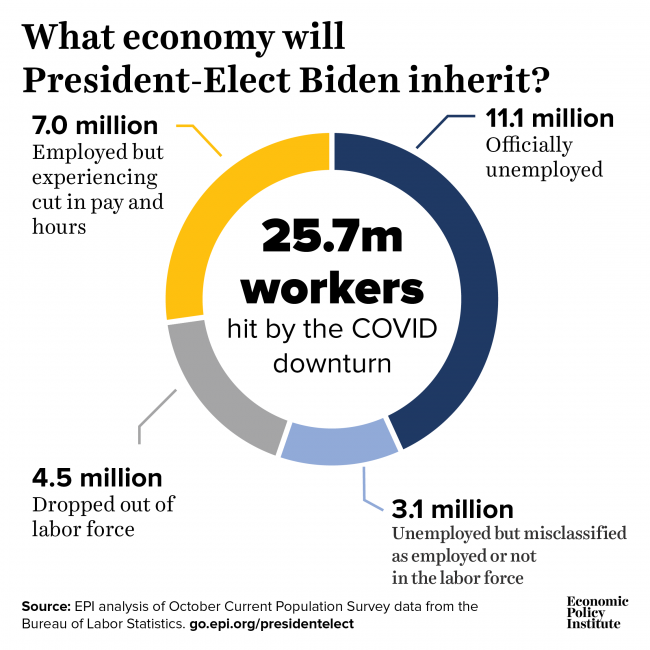 Let’s first look at UI. One straightforward way that the weekly UI numbers are higher than the monthly unemployment numbers is that the UI numbers include both Puerto Rico and the Virgin Islands, and the monthly unemployment numbers include only the 50 states and the District of Columbia. The number of people on UI (regular state benefits, Pandemic Unemployment Assistance, Pandemic Emergency Unemployment Compensation, or Extended Benefits) for the week ending October 17 was 294,000 in Puerto Rico and 4,000 in the Virgin Islands, for a total of nearly 300,000 UI claims outside of the 50 states and the District of Columbia.

An important way the numbers coming out of DOL are overstating the number of people receiving UI benefits in the 50 states and the District of Columbia has to do with delays in the processing of applications (delays caused by the overwhelming number of applications UI agencies have received during the COVID-19 crisis). When a worker’s benefits are delayed, they are paid retroactively. This is as it should be, but it causes reporting problems. Say a worker claims UI benefits not just for their most recent week of unemployment, but also for the six prior weeks. That worker will show up in the data not as one person who claimed seven weeks of benefits, but as seven claims. Nobody knows how extensive that problem is. Another issue is that state UI agencies have been the target of fraud—not individuals filing one or two fraudulent claims, but sophisticated cyberattacks involving extensive identity theft and the overriding of security systems. Note: None of this negates the fact that the expansions of unemployment insurance in the CARES Act were an enormous success! These expansions have been a lifeline to millions and a crucial boost to the economy.

It is worth noting that both of the issues described in the previous paragraph (double-counting of claims and vulnerability to fraud) are problems precisely because we have profoundly disinvested in our UI systems, and agencies are often working on computer systems that are decades old. We entered this recession with a rickety system that was nowhere near agile enough nor sound enough to handle what has been expected of it during this time, and we are now paying the price. We must not make this mistake again; we must shore up our systems so that we enter the next recession with the world-class system U.S. workers deserve.

Given the problems with the UI data, I estimate the number of workers affected by the coronavirus recession using the monthly unemployment data from BLS. As mentioned above, the official number of unemployed in October—11.1 million—is a vast undercount of the number of workers being harmed. Here are the missing factors:

Adding up all but the last quantity above, that is 11.1 million + 0.6 million + 4.5 million + 2.5 million = 18.7 million workers who are either officially unemployed or otherwise out of the labor force as a result of the virus. Also adding in the 7.0 million who are employed but have seen a drop in hours and pay because of the pandemic brings the number of workers directly harmed in October by the coronavirus downturn to 25.7 million. That is more than 15% of the workforce.

This means that even though I noted above that the number of workers DOL reported were on UI during the reference week—21.5 million—is an overstatement, it is nevertheless substantially lower than the number of workers being harmed by the coronavirus downturn. That is due to the fact that not everyone who is officially unemployed, otherwise out of work as a result of the virus, or has had their hours and pay cut as a result of the virus, applies for UI.

Finally, even the 25.7 million is an undercount. For one, it doesn’t count those who lost a job or hours earlier in the pandemic but are back to work now. The cumulative impact would be much higher. But perhaps more importantly, the 25.7 million is a drastic undercount because it ignores the fact that even workers who have remained employed and have not seen a cut in hours are being hurt by the recession. How? Essentially the only source of power nonunionized workers have vis-à-vis their employers is the implicit threat that they could quit their job and take another job elsewhere. Case in point: One of the most common ways nonunionized workers get a wage increase is by getting another job offer for higher pay—they either accept the new job, or their current employer gives them a raise in response to their outside offer. When job openings are scarce, as they are now, workers’ leverage dissolves. Employers simply don’t have to pay as well when they know workers don’t have as many outside options.

All this means that stimulating the economy to create jobs is crucial—both to the 25.7 million workers who are being directly harmed by the recession because they are either out of work or have had their hours and pay cut, and to the millions more who saw their bargaining power disappear as the recession took hold. This is a preventable disaster for the workers of this country. Extending the unemployment insurance provisions of the CARES Act and providing fiscal aid to state and local governments could alone create or save millions of jobs over the next year (see here and here). It is both cruel and terrible economics that Senate Majority Leader Mitch McConnell adjourned the Senate with no COVID-19 relief. As the country considers the results of the 2020 election, with Joe Biden poised to win, let’s hope that policymakers do better—the working people of this country are depending on it.