Yesterday’s inflation data for April 2022 was a mixed bag but had some encouraging seeds in it. Measured year-over-year, overall and core inflation (inflation minus the influence of volatile food and energy prices) both ticked down slightly. Measured just over the past month, the overall index decelerated significantly, but the core index rose back up to the level it had plateaued at in the five months before March. This post is about why wage trends—both throughout the inflationary burst and in very recent months—should make us even a bit more encouraged that inflation can be brought back under control without the Federal Reserve having to move interest rates to a radically more contractionary stance.

There has been a lot of discussion—and confusion—recently about the role of tight labor markets (“the Great Resignation”) in the rise of inflation we’ve seen since early 2021. In this post, we make the following points about the wage/price relationship:

Nominal wage growth since early 2021 has been rapid if one only compares it with its own growth over the past two decades. However, atypically fast nominal wage growth in the past 15 months has not been a significant driver of inflation. To explain why, it helps to draw on previous work that examined nominal wage growth targets that would be consistent with the Fed’s 2% long-run inflation target.

Essentially, if the Fed wants 2% inflation, this implies that nominal wages can grow in the long run at roughly 3.5–4%. This is because 2% inflation means that all per-unit costs (including wages) can grow by 2%. But ongoing growth in productivity—output produced in an hour of work—allows the same costs to be spread over more output, which will drive down costs per unit produced. Add in 1.5–2% trend productivity growth, and nominal wages can grow at 3.5–4% annually with prices growing 2% annually.

If policymakers today targeted a return to pre-pandemic labor share, this would require having the labor share of income rise by roughly 6 percentage points. This means that nominal wages could grow at 1% above the long-run nominal wage target for about six years and still be consistent with 2% inflation, as long as this happened with the labor share returning to its 2019 level (a notably unambitious goal). This means wages could grow at a 4.5–5% rate and still be consistent with just 2% inflation.

In last week’s jobs report, growth in average hourly earnings over the last quarter was 4.4% (at an annualized rate). The last three months have seen wage growth slow, with changes averaging just 3.8% (at an annualized rate). In short, nominal wage growth in recent periods is not screaming hot even by the very conservative gauge of what’s consistent with 2% price inflation.

But, in fact, the labor share of income actually has recovered about 1 percentage point over this time, so some of the nominal wage gains have not fed directly into price inflation. This means that even the 5.5–6% peak wage growth of the recent past should only be associated with inflation of about 3–3.5%.

In short, the wage data show that the vast majority of price inflation has not so far been driven by fast wage growth, and that wage growth is already showing signs of decelerating. In a recent blog post, we undertook sort of the reverse exercise, showing that measured corporate profits explain an outsized share of recent price changes in the current recovery.

In fact, wage growth has been dampening inflation all along—and will continue to do so

It may seem counterintuitive that nominal wage growth has been atypically fast over the past year yet has been holding back price inflation. Four examples might help with the intuition here.

Say that the price of a unit of output is explained by growth in unit labor costs, unit nonlabor costs, and profits. If all three price components are rising by 2%, then prices (which are just the sum of these cost components) will also rise by 2%. (In the three examples below, for simplicity, we’ll ignore productivity growth.)

Now, say that there has been a one-time shock to unit nonlabor costs (imagine the pandemic channeled demand into the durable goods sector just as it also introduced terrible supply-chain snarls) and its growth jumps to 5% for a single period, but then falls back to 2%.

In this scenario, imagine that unit labor costs and profits didn’t respond at all to that shock and continued on the 2% growth trajectory throughout. In this case, there would be a one-time blip in inflation, and then it would immediately fall and stick thereafter at the pre-shock rate of 2%. The size of the blip would be the 3% “excess” inflation in unit nonlabor costs (5% versus the normal 2% increase) multiplied by the share of total prices accounted for by nonlabor costs. Normally, this share is about 25%, so instead of 2% inflation, for one period prices would rise by about 2.75% (2% plus the 3% “excess” rise in nonlabor costs multiplied by the 25% share of total costs accounted for by nonlabor inputs). The figure below shows this scenario (Scenario 1)—overall price inflation blips up to 2.75% but returns nearly instantly to its normal long-run rate of 2%.

In a second scenario, imagine instead that all three inputs’ prices change in any given time period to exactly match the overall inflation in the previous period. For labor costs, imagine all workers’ wages saw an automatic one-for-one cost-of-living increase with any price change, and that providers of nonlabor inputs and capital were also able to hold their real payments totally harmless against any change in inflation. Essentially, this is akin to saying that there is a “pass-through coefficient” running from last period’s inflation rate to this period’s growth in component costs, and this coefficient is exactly equal to 1 for all components. In this case, the 5% blip in unit nonlabor costs would lead to inflation moving permanently to 2.75%. The 5% nonlabor cost blip pushes up overall price growth to 2.75%, but then in the next period each component of cost then rises to 2.75% as well to hold its real purchasing power harmless in the face of this price growth. Because of the “pass-through coefficient” equaling exactly 1 for all cost components, this 2.75% hence becomes the new anchor of inflation. The figure below shows this scenario (Scenario 2) as well—overall inflation blips up and then sticks exactly at the new level permanently. No cost component dampens the initial shock so it persists forever.

Now let’s move on to the third scenario, in which wages dampen inflation. In this scenario, there is a 5% blip to nonlabor input costs (as before) and nonlabor inputs and profits each have a “pass-through coefficient” of exactly 1 (as before), but now wage growth in the current period rises by only 90% of the rise in last period’s overall inflation (the “pass-through coefficient” is just 0.9). In this scenario, price inflation blips up to 2.75%, but then it steadily falls over time until reaching the pre-shock 2% target. In each period, because wages don’t rise by the full amount of last period’s inflation, they tamp down the inflation rate. This makes next period’s cost growth of both nonlabor inputs and profits ratchet down a bit as well. And then wage growth in the next period again comes in slightly below overall inflation, further tamping down inflation, and so on. The figure shows this scenario (Scenario 3) as well—inflation rises due to the shock but then mechanically moves back down to its pre-shock level because wage growth dampens the initial shock.

Finally, imagine a scenario in which the “pass-through coefficient” on wages and nonlabor inputs is 1, but for profits it is greater than 1. In this case, the initial blip in nonlabor inputs leads to inflation spiraling upward, as profits rise faster each period than last period’s inflation rate. The figure shows this scenario (Scenario 4) as well—profits amplify the initial shock.

These scenarios give us a way to understand what has happened so far to inflation, and what policymakers should be thinking about going forward. So far, the pass-through coefficient on wages has been unambiguously far below 1, leading to wage growth dampening inflation, as in Scenario 3. But the pass-through coefficient on profits has been above 1, leading to profit growth amplifying inflation, as in Scenario 4. The net effect of these conflicting influences has so far been rising inflation, but wage growth is clearly providing a pronounced dampening effect.

Worries about a “wage-price” spiral and current calls for the Fed to adopt a notably more hawkish stance seem to be mostly implicit concerns that the pass-through coefficient on wages will rise to (or even above) 1. One way to keep this coefficient down (or reduce it further) is to engineer higher unemployment that saps workers’ bargaining power. Given that wages are already dampening inflation, this higher unemployment would just steepen the downward slope of the line in Scenario 3, moving forward the date at which inflation returns to normal levels.

Alternatively, some of those currently calling on the Fed to be substantially more aggressive in cooling off the economy implicitly seem to think that the profit pass-through coefficient might be tamped down by an economic slowdown. Larry Summers, for example, has argued that any source of inflation is ipso facto evidence that the economy is overheated and needs rapid cooling. As he is quoted in the piece linked above, “Look, the job of macroeconomic policy is to balance demand and supply. If you get accelerating inflation, that means you failed.”

But in nearly all past recoveries, higher unemployment is associated with higher profit margins, not lower. In most versions of economic theory and in essentially all the evidence we have over the past 50 years, it is labor costs—not nonlabor costs or profits—that get pulled down sharply by higher unemployment in nonrecessionary years.

All else equal, a more rapid return to normal inflation would be good. But if this return is largely set to happen anyhow, and if it can only be hastened by increasing unemployment, it is far from obvious this is a good trade-off. Further, if policymakers look to quickly return inflation to normal levels by pushing down workers’ pass-through coefficient while doing nothing to lower these coefficients for nonlabor inputs or profits, then this will put a huge burden on workers (in the form of very large falls in inflation-adjusted wage growth) to force inflation adjustment.

Luckily, both nonlabor inputs and profits seem to be slowing a bit in recent quarters. And as we pointed out before, average hourly earnings are also decelerating. Absent future shocks (from either geopolitical events or pronounced resurgences of the virus), inflation may well be set to come down over the next year. But even if this doesn’t happen soon, it remains unambiguously true that wage growth has dampened inflation over the past year. There is no evidence this looks set to change anytime soon, and in fact its dampening effect actually seems to be increasing in recent months. 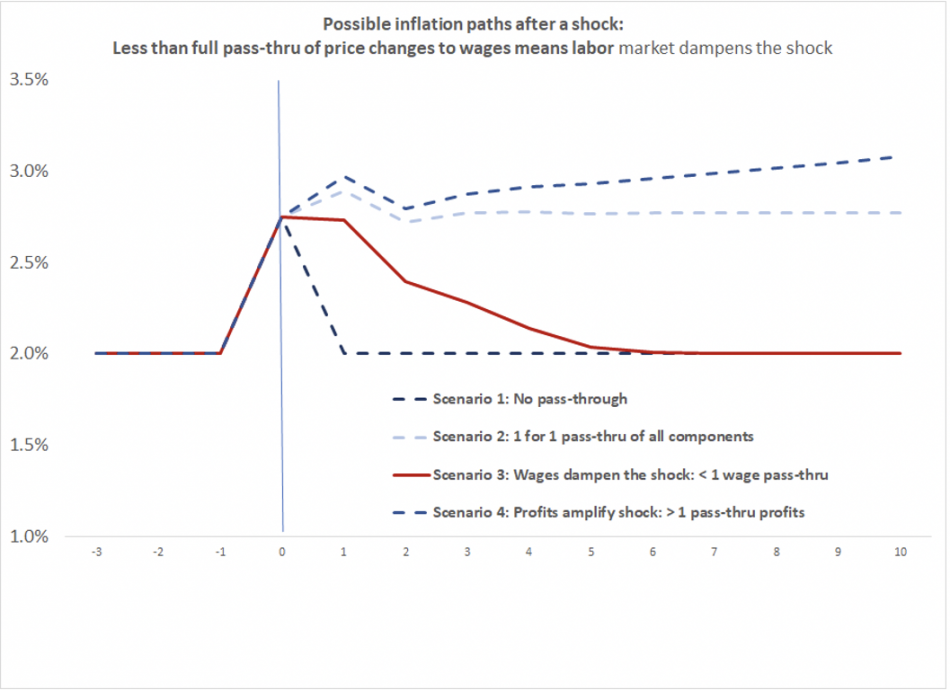