Saturday marks 12 years since the last federal minimum wage increase on July 24, 2009, the longest period in U.S. history without an increase. In the meantime, rising costs of living have diminished the purchasing power of a minimum wage paycheck. A worker paid the federal minimum of $7.25 today effectively earns 21% less than what their counterpart earned 12 years ago, after adjusting for inflation.

Chart of the Week

After the longest period in history without an increase, the federal minimum wage in 2021 was worth 21% less than 12 years ago—and 34% less than in 1968. : Real value of the minimum wage (adjusted for inflation) 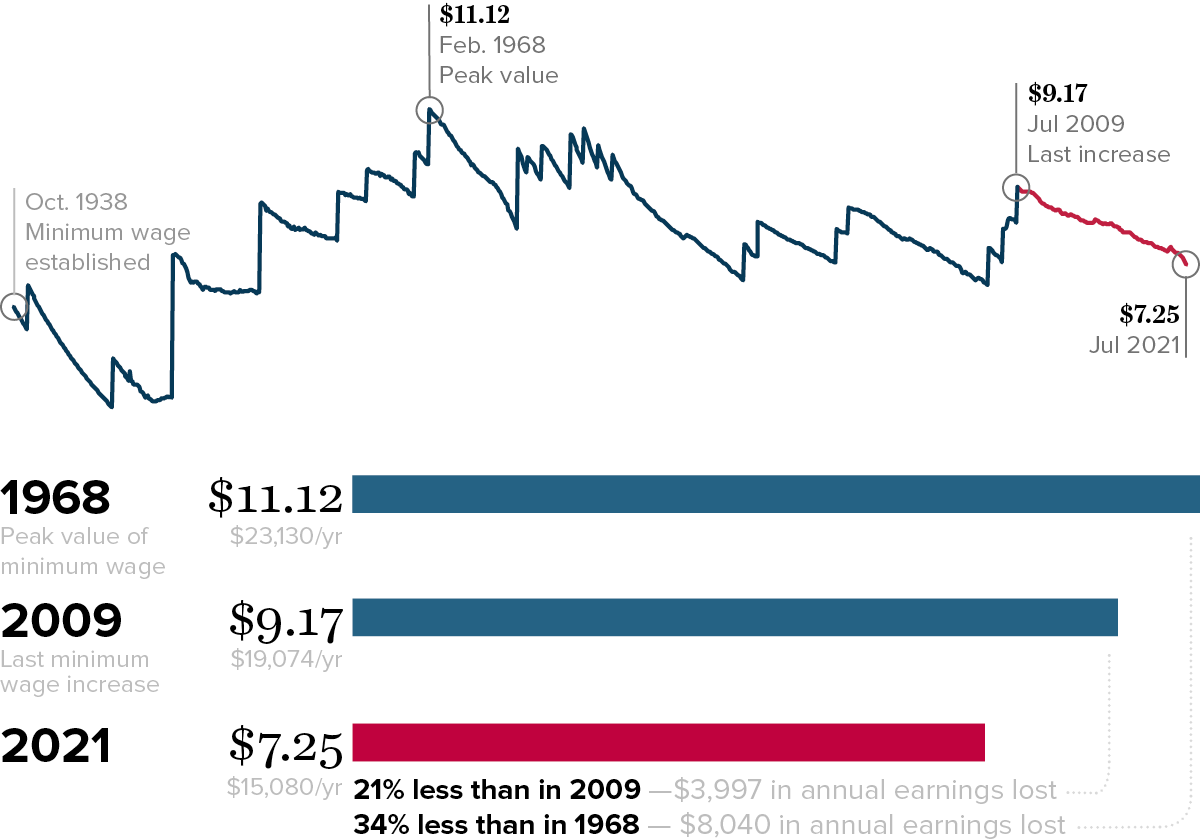 Notes: All values are in June 2021 dollars, adjusted using the CPI-U-RS

As a result of Congressional inaction, over two dozen states and several cities have raised their minimum wage, including 11 states and the District of Columbia that have adopted a $15 minimum wage. These higher wage standards have increased the earnings of low-wage workers, with women in minimum wage-raising states seeing the largest pay increases. In the rest of the country, however, states have punished low-wage workers by refusing to raise pay standards. As many as 26 states have gone so far as to pass laws prohibiting local governments from raising their minimum wage.

A step in the right direction would be a $15 national minimum wage by 2025, as called for by the Raise the Wage Act of 2021. The policy would raise the wages of 32 million workers and increase the earnings of nearly one in three Black workers (31%) and one in four Hispanic workers (26%). It would also raise the wages of 19 million front-line and essential workers. By helping to ensure decent pay, a national $15 minimum wage by 2025 would lift up to 3.7 million people out of poverty, including 1.3 million children.

For too long, Congress has abandoned its responsibility “to protect this Nation from the evils and dangers resulting from wages too low to buy the bare necessities of life,” as was called for by the Senate during the enactment of the first Fair Labor Standards Act in 1938. After a dozen years of declining wage standards, it is past time for Congress to do its job and raise the minimum wage.