The economy President-elect Biden is inheriting: 26.8 million workers—15.8% of the workforce—are being directly hurt by the coronavirus crisis

We now have a full year of jobs data for 2020. This is an important moment to take stock of where things stand in the labor market.

The official unemployment rate was 6.7% in December, and the official number of unemployed workers was 10.7 million, according to the Bureau of Labor Statistics (BLS). These official numbers are a vast undercount of the number of workers being harmed by the weak labor market, however. In fact, 26.8 million workers—15.8% of the workforce—are either unemployed, otherwise out of work due to the pandemic, or employed but experiencing a drop in hours and pay. Here are the missing factors:

Adding up all but the last quantity above, that is 10.7 million + 1.0 million + 2.7 million + 4.9 million = 19.3 million workers who are either unemployed or otherwise out of the labor force as a result of the virus. Accounting for these workers, the unemployment rate would be 11.3%. Also adding in the 7.5 million who are employed but have seen a drop in hours and pay because of the pandemic brings the number of workers directly harmed in December by the coronavirus downturn to 26.8 million. That is 15.8% of the workforce. 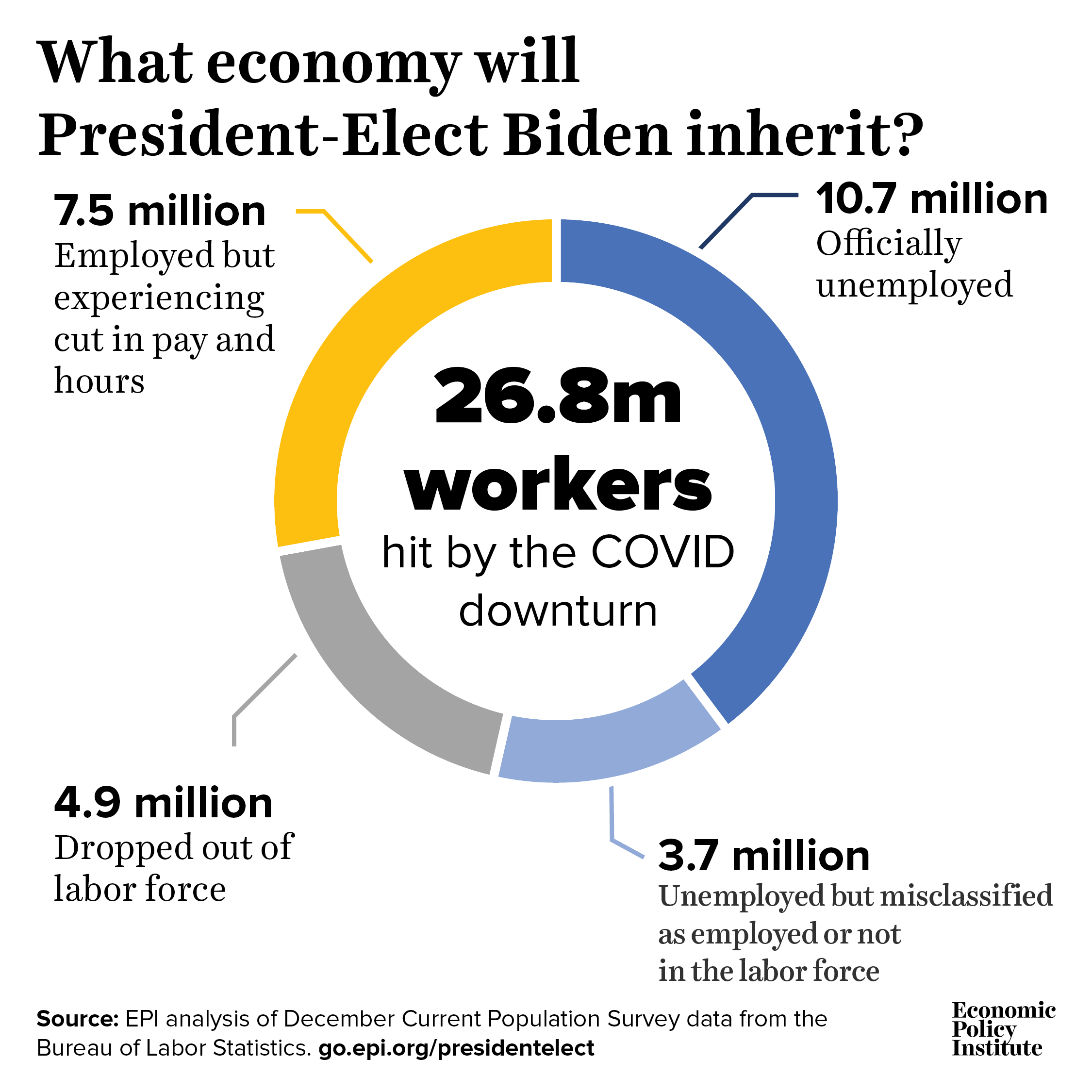 Finally, even the 26.8 million is an undercount. For one, it doesn’t count those who lost a job or hours earlier in the pandemic but are back to work now. The cumulative impact would be much higher. But perhaps more importantly, the 26.8 million is a drastic undercount because it ignores the fact that even workers who have remained employed and have not seen a cut in hours and pay are being hurt by the weak labor market. How? Essentially the only source of power nonunionized workers have vis-à-vis their employers is the implicit threat that they could quit their job and take another job elsewhere. Case in point: One of the most common ways nonunionized workers get a wage increase is by getting another job offer for higher pay—they either accept the new job, or their current employer gives them a raise in response to their outside offer. When job openings are scarce, as they are now, workers’ leverage dissolves. Employers simply don’t have to pay as well when they know workers don’t have as many outside options.

All this means that stimulating the economy to create jobs is crucial—both to the 26.8 million workers who are being directly harmed by the downturn because they are either out of work or have had their hours and pay cut, and to the millions more who saw their bargaining power disappear as the recession took hold. It is even more urgent considering the country is now facing a resurgent virus and renewed job losses.

A further reason more relief is so important is that this crisis is greatly exacerbating racial inequality. Due to the impact of historic and current systemic racism, Black and Latinx workers have seen more job loss in this pandemic and have less wealth to fall back on. To get the economy back on track in a reasonable timeframe, policymakers should pass an additional $2.1 trillion in fiscal support (the $2.1 trillion is calculated by subtracting the $900 billion December COVID-19 relief bill from the total $3 trillion in fiscal support that is actually needed). In particular, it is crucial that Congress provide substantial aid to state and local governments. Without this aid, austerity by state and local governments will result in cuts to essential public services and the loss of millions of jobs in both the public and private sector.

Senate Republicans forced the December bill to be far too small. Fortunately, with their new majority in the Senate given the results of the Georgia runoffs, Democrats will now be able to get more relief measures through reconciliation. Top priorities must be aid to state and local governments and further extensions of unemployment insurance. There is no time to lose.