Raising rates, even a little, will slow the economy and slow progress in reducing unemployment

This week the Federal Open Market Committee (FOMC) will meet to decide whether or not to raise interest rates. By now this is a familiar debate. Some (call them hawks) argue that rate hikes are needed to slow the pace of economic growth and slow progress in reducing unemployment in the name of combating potential inflation. Others (call them doves) argue that we should not tighten until we’re absolutely sure that genuine full employment has been locked in. The past years’ evidence argues strongly that the doves are right.

Let’s start with the Fed’s own projections, which some Fed officials recently pointed to during a meeting with the Fed Up coalition to claim that interest rate increases were not meant to slow the economy or raise unemployment.

The table below shows the Fed’s current projections for the unemployment rate and other variables. They forecast that it will move from today’s 4.9 percent to 4.7 percent in the last three months of this year, and then fall further, to 4.6 percent for 2017 and 2018. After this it rises (after some unspecified time) to its long-run equilibrium of 4.8 percent. This 4.8 percent long-run rate is essentially the Fed’s estimate of the “natural rate of unemployment”—the lowest rate the economy can stay at without sparking an acceleration of inflation (this acceleration terminology is key: it’s not just inflation rising from 1.5 percent to 2.5 percent, it’s inflation that rises from 1.5 percent to 2.5 percent to 3.5 percent to 4.5 percent and so on). Importantly, in the Fed’s forecast, the unemployment rate falls over the next three years even as the projected federal funds rate is moved steadily up. By 2018, the 4.6 percent unemployment coincides with a 2.4 percent federal funds rate (it is just 0.25 percent today).

First, it really seems to ratify that the Fed sees their 2.0 percent price inflation target as a hard ceiling that can never be breached, rather than a long-run average. Reifying this as a hard ceiling will do damage to the Fed’s credibility, and makes it much harder to run the economy hot enough to heal some of deep damage done by the Great Recession.

Second, the figure below shows the Fed projections for price inflation in recent years combined with the actual behavior of this inflation. In every projection since 2012, the Fed has projected steady rises in core inflation as unemployment falls. But this steady rise has yet to happen. And it hasn’t happened largely because there has been only the smallest recovery in nominal wage growth in recent years. Until this wage growth picks up and hits 3.5 percent or more (up from today’s 2.4 percent growth), the Fed will continue to miss their 2.0 price inflation target on the low side. 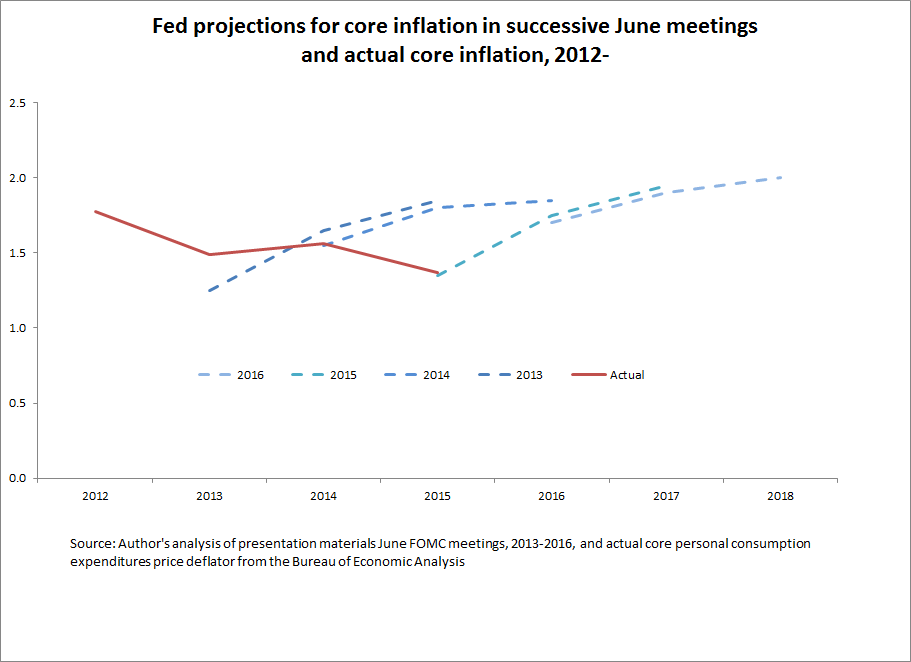 What if, however, instead of the Fed’s projected path, we allowed unemployment to fall below the Fed projection, say with it reaching a low of 4.2 percent in 2017 and 2018 before nudging back up to 4.4 in the long run? Is such a path possible?

It is certainly possible. If interest rates were held steady rather than raised as the Fed projects they will be, there is good research suggesting that a 2 percentage point difference in the federal funds rate could indeed lead to unemployment that is nearly half a percentage point lower after two years. Further, the interest rate increases projected by the Fed could well be much more contractionary in today’s economy than they are normally.

Is such a path sustainable in terms of not generating accelerating inflation?

Let’s say that doves are wrong and price inflation exceeds the target by enough in coming years that the Fed wants to rein in growth then. Would it obviously be too late for a controlled deceleration and would the Fed need to induce a 1980s-style recession to bring inflation back to their long-run target? There’s no reason to think so. Interest rate increases have pretty predictable effects on future inflation. Indeed, the fact that the contractionary effects of interest rate increases are much more predictable and reliable than the expansionary effects of further ease is a key reason why doves stress how much riskier it is to move too early rather than too late on interest rate increases.

But let’s assume the doves are right and that in the long run the unemployment rate can be a full half-point below what the Fed has estimated (again, this has happened before in recent history). The gains here are huge: about 700,000 more workers have jobs and the pace of wage growth for tens of millions of workers is substantially higher.

Yes, the interest rate debate is getting a little old. But so is the lack of recovery in wage growth for millions of American workers. 2015 was a great year for many families’ incomes—there’s no reason not to shoot for a couple more such years.