The November employment report released this morning by the Bureau of Labor Statistics contained some relatively positive news, with the establishment survey showing an increase of 203,000 jobs. Jobs growth occurred across most industries, including gains in manufacturing, retail trade, transportation, professional services, and health care. While this is promising, especially because it comes on the heels of 200,000 jobs added in October, we still need 7.9 million jobs to get back to the prerecession unemployment rate.

Additionally, millions of potential workers remain sidelined. There are nearly 5.7 million workers who are neither employed nor actively seeking a job. These are people who would be working or looking for work if job opportunities were significantly stronger. If they were counted among the unemployed, the unemployment rate would have been 10.3 percent in November.

As expected, the November employment report showed some reversal of October’s trends in the household survey data. Because of the distortions in the October household survey from the government shutdown, the change from October to November provides little information about the underlying labor market trend. Instead, it’s important to focus on shifts over longer time periods.

1. The government shutdown is behind us, but the public sector is still down 1.47 million jobs.

3. High unemployment continues to plague all demographic and occupational groups.

We now examine each of these in turn.

1. The government shutdown is behind us, but the public sector is still down 1.47 million jobs

While there have been 728,000 public-sector jobs lost, we need another 744,000 on top of that to keep up with population growth. In total, the public-sector employment deficit since 2009 sits at 1.47 million. 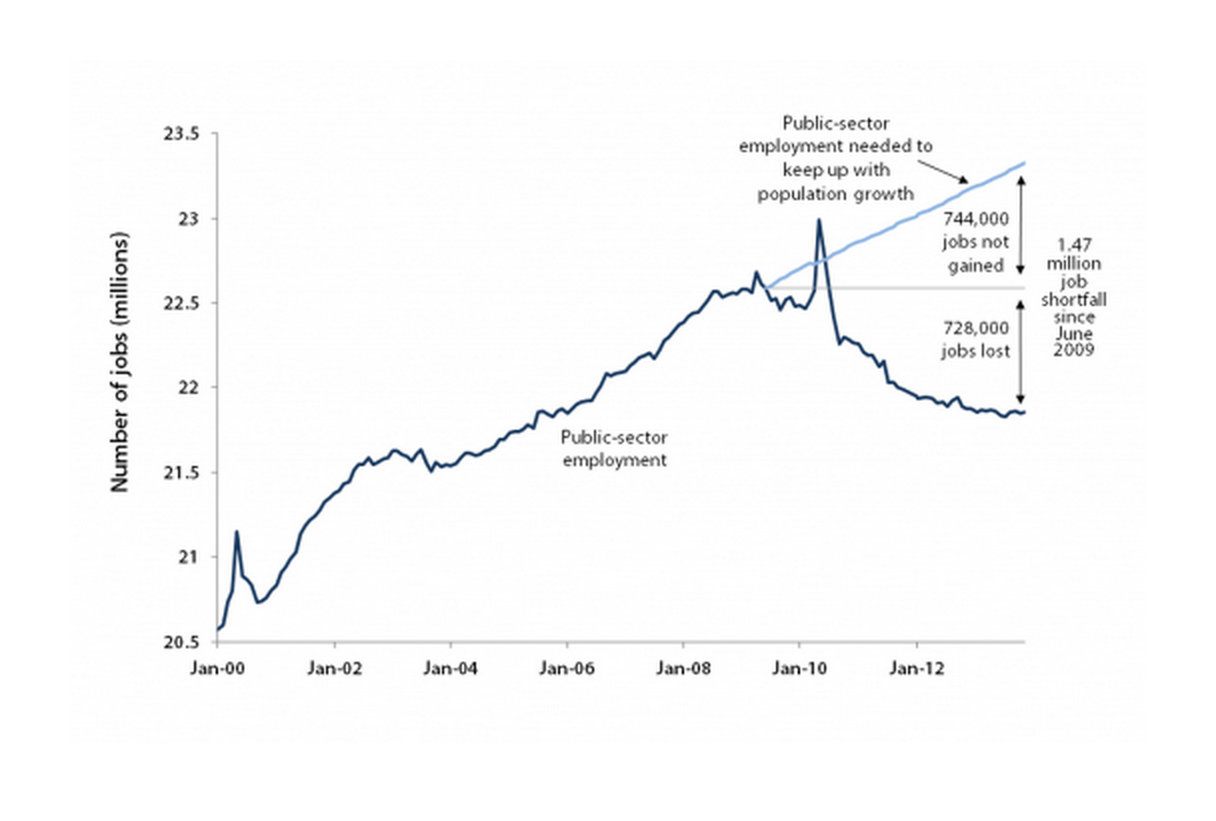 Note: The spikes in public-sector employment in 2000 and 2010 are temporary workers hired to conduct the decennial Census.

While the overall unemployment rate declined, long-term unemployment rose. While the share of unemployed workers who have been out of work for more than six months has generally been coming down since its peak of 45.3 percent in March 2011, it increased in November from 36.1 percent to 37.3 percent (increasing as well from the September rate of 36.9 percent, arguably a better benchmark), as shown in the figure below. Today, the long-term unemployment rate is more than double the average rate in 2007.

The share of the unemployed who have been jobless for six months or more, 1948–2013

3. High unemployment continues to plague all demographic and occupational groups

The table below shows the current unemployment rate and the unemployment rate in 2007, along with the ratio of those two values, for various demographic and occupational categories. There is currently substantial variation in unemployment rates across groups, as is always the case. A key message from this table is that the unemployment rate is between 1.3 and 1.8 times as high now as it was six years ago for all groups. Today’s sustained high unemployment relative to 2007 across all age, education, occupation, gender, and racial and ethnic groups underscores that the jobs crisis stems from a broad-based lack of demand. In particular, unemployment is not high because workers lack adequate education or skills; rather, a lack of demand for goods and services makes it unnecessary for employers to significantly ramp up hiring.

— With research assistance from Hilary Wething, Alyssa Davis, and Will Kimball