In 2015, the typical woman was paid 83 cents for every dollar earned by her male counterparts on an hourly basis. A large body of research diagnoses and investigates this gender wage gap—and finds that eliminating it is essential to ensuring the economic security of American women and the families that rely on them. At the same time as the gender wage gap has persisted, the gap between typical workers’ compensation and economy-wide productivity growth has diverged. While the gender wage gap is a serious economic challenge, it exists within a larger problem of stagnant wages and widening inequality, which affects men’s and women’s wages alike. 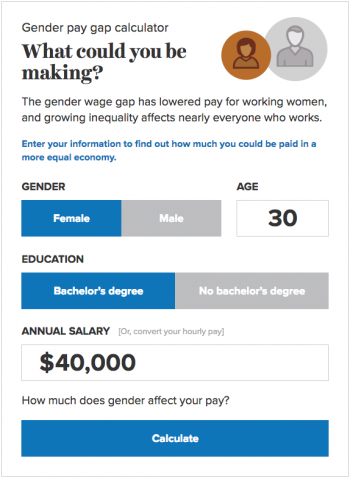 “Rising inequality has kept the vast majority of men’s and women’s wages from rising as fast as gains in economy-wide productivity over the last four decades. The hourly pay of typical workers has essentially stagnated even as the economy has grown,” said EPI Senior Economist Elise Gould. “Closing only the gap between men’s and women’s wages threatens to ensure parity in this stagnation, not parity in progress. To achieve true progress, the gender wage gap must be closed alongside the gap between economy-wide productivity and the wages of most workers.”

EPI’s latest paper, What is the gender pay gap and is it real? The complete guide to how women are paid less than men and why it can’t be explained away, provides a comprehensive look at how the gender pay gap affects women’s wages and economic security. Meanwhile, EPI has proposed solutions to closing both the gender wage gap and eliminating inequality, including better wage transparency, raising the wage floor, reducing labor standards violations, strengthening the ability of workers to collectively bargain, ensuring the economy reaches full employment, and paid family leave.

“These solutions would help close the gender wage gap, but also work toward closing the inequality gap. Research has shown that policies such as paid family leave and subsidized child care increase parental labor force participation for both men and women,” said Gould. “And, this increase in labor force participation would mean more earnings for families and more economic activity for the country.”