Racial gaps in wages, wealth, and more: a quick recap

Recently, I had the opportunity to present some key facts on 1A, a new NPR news program, about the state of black America. Drawing heavily upon research by my colleague Valerie Wilson and her co-author William Rodgers III, I reported on the economy for black workers and the overall disparities that remain, and, in some cases, continue to worsen. Since that hour went by fast (and you might have missed it), I want to reiterate some of those points briefly here.

Black-white wage gaps are larger today that they were 35 years ago. For both men and women who work full time, the regression adjusted racial wage gap has widened since 1979. The figure below shows that, relative to the average hourly wages of white men with the same education, experience, metro status, and region of residence, black men make 22.0 percent less, and black women make 34.2 percent less.

Note: The adjusted wage gaps are for full-time workers and control for racial differences in education, potential experience, region of residence, and metro status.

The black-white wealth gap is larger than the wage or income gaps. Median white wealth ($134,000) is 12 times higher than median black wealth ($11,000). And, 27 percent of black households have zero net worth (or less), while only 9 percent of white household do. In other words, black Americans face particular difficulties in trying to get ahead themselves or helping their children get ahead—in achieving the elusive American dream.

Housing discrimination and housing segregation play an important role in the ability of black households to gain wealth. In an important forthcoming book (previewed in this poignant article), Richard Rothstein documents the evidence that the government did more than merely ignore discriminatory practices in the residential housing market for decades even after World War II, but actually promoted them. On top of housing discrimination writ large, environmental racism remains ever-present, exemplified by the disproportionate incidence of lead poisoning in poor and minority communities, which is proven to significantly affect health, future economic wellbeing, and even crime rates.

The criminal justice system—the mass incarceration of black men, the criminalization of blackness, and our unique for-profit bail system—also has a significant role to play in not only the ability for those incarcerated to get ahead but also for their children. The criminal justice system makes an important contribution to the racial achievement gap. Even as violent crime rates have continued to fall, an African American child is six times as likely as a white child to have or have had an incarcerated parent. A growing share of African Americans have been arrested for drug crimes, yet African Americans are no more likely than whites to sell or use drugs. These disparities in parental incarceration further perpetuate racial differences in achievement through an array of cognitive and non-cognitive outcomes linked to children’s performance at school.

Taken together, then it should come as no surprise, however disheartening, that economic mobility—the likelihood of doing better than your parents or climbing the economic ladder—is lower for African Americans than it is for whites. The figure below illustrates a key takeaway from the economics literature on mobility. If you take black and white children born into the bottom fourth of the income distribution, then as adults, those who are black are twice as likely to stay there than those who are white. Other research corroborates this finding of disparate persistence that African American born into the bottom earnings groups are more likely to stay there as adults. 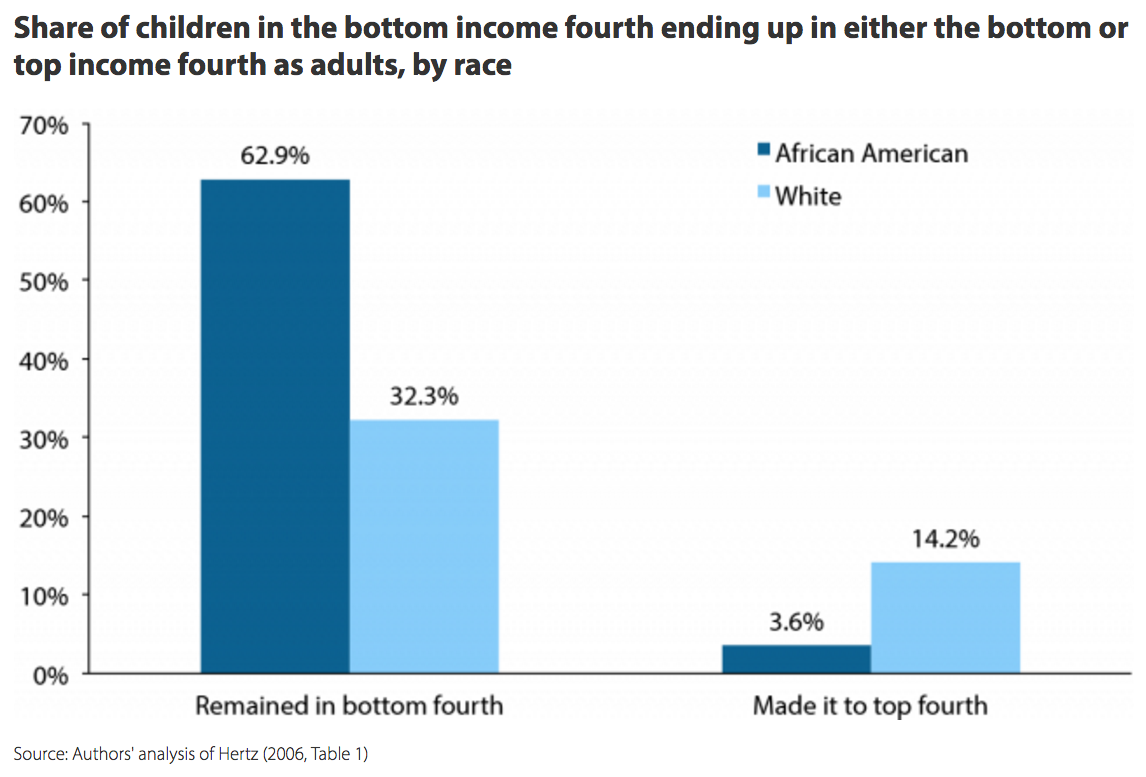 While the show just barely touched on solutions, here are some of my top ones to help close racial wage gaps (borrowed heavily from Wilson and Rodgers):