Much has changed since the first May Day, but building worker power and combating racism and xenophobia remain just as important

May 1 is International Workers’ Day, a day workers around the world mark as Labor Day with marches, demonstrations, and renewed calls for workers’ rights. “May Day” got its start in 1886, when U.S. workers rallied in support of ongoing campaigns for an eight-hour day, setting May 1 as a deadline to begin mass strikes if employers failed to adopt shorter hours. 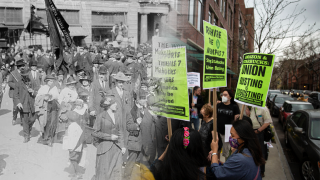 In 1886 Chicago, where tens of thousands joined May Day actions and thousands went on strike, subsequent police shootings of striking workers escalated into the well-known Haymarket Tragedy. Months of state-sanctioned, anti-immigrant repression of labor organizing followed. Police raids of union halls and arrests of organizers culminated in a sham trial, eight guilty verdicts, and public hanging of four prominent immigrant, working-class movement leaders (a fifth died by suicide prior to the execution date). The trial and executions were followed closely by workers across the country and around the world. In memory of the Haymarket Martyrs, labor and socialist organizations declared May Day International Workers’ Day, now an official public holiday in many countries.

Over 100 years later, our May Day 2022 economy has much in common with that of May Day 1886—rising inequality, economic upheavals affecting those with the least financial security, xenophobia, market concentration, and an upsurge in workers taking matters into their own hands while facing intense employer resistance. U.S. factory workers and railroad workers are still campaigning for shorter hours, in some cases striking (or threatening strikes) to challenge inhumane 12-to-14-hour shifts and unpredictable forced overtime. New generations of workers, including many immigrants, are breaking through barriers of employer union-busting to organize unions in warehouses, hospitals, nursing homes, coffee shops, retail stores, media outlets, universities, and beyond.

This May Day, policymakers should follow the lead of these workers, reverse policies that constrain worker power, and avoid the mistakes of the First Gilded Age that followed May Day 1886 by enacting a pro-worker agenda at both state and federal levels.

A shortened workday was a radical concept in 1886, as six-day workweeks with 12-to-14-hour days were not uncommon. Working conditions were dismal, and the nation was in the midst of the “Long Depression,” a period of severe contraction and crisis in the banking and railroad sectors. Growing numbers of workers were taking action to demand better; the Bureau of Labor Statistics reported 695 strikes took place in 1885 with just over 250,000 workers involved. Just one year later, in 1886, there were over double the number of strikes and 610,000 workers involved.

One hundred thirty-six years later, while much has changed, several core dysfunctions of that older economic system persist: vast inequality, precarious low-wage labor, corporate concentration and soaring profits, wages barely keeping up with prices, widespread employer hostility to worker organizing, and pernicious forms of xenophobia and racism deployed to divide workers against each other. This May Day 2022 is also marked by emerging upticks in worker organizing and growing interest in labor unions, after decades of declining union density driven by anti-worker economic policies and increasingly weak labor laws.

Well before the pandemic, significant numbers of workers were fighting to improve conditions and address long-standing imbalances of power. In 2019, for example, 485,000 workers were involved in major work stoppages, the highest number since 1986. Given that official work stoppage data only includes strikes involving 1,000 or more workers, the number of workers taking collective action was likely much higher. While the pandemic temporarily slowed this momentum, significant labor victories in 2021 and 2022 suggest workers are beginning to pick up where they left off. From factory workers striking for better wages and hours, to faculty and graduate workers forming successful unions in public and private universities alike, to customer service specialists and baristas organizing at some of the country’s largest food, tech, and retail corporations, to the stunning victory of the Amazon Labor Union at JFK8 on Staten Island, workers across the economy are sparking a movement.

Xenophobia was the knee-jerk response of governments, businesses, and too much of the public in the post-Haymarket era when state-sanctioned employer violence and repression effectively eliminated many of the most robust worker organizations in formation during the late 19th century, especially targeting those that brought workers together across lines of race, gender, or immigration status. In the U.S., the once-flourishing struggle for an eight-hour day and other core demands for worker dignity were largely halted in their tracks for at least another generation, allowing racial, gender, and economic inequalities to deepen even further. Employers who supported high levels of immigration to maintain access to low-wage labor were equally ready to foment nativist backlash when immigrant workers began to push for better wages and conditions. Immigrants recruited to work in low-wage jobs, while carrying skills, education, organizing experience, and socialist ideas from their home countries, often played leadership roles in labor organizing. In Illinois, for example, the 1880 Census shows that of the white population, 7.5% were born in Germany—among them the five German immigrants sentenced to hang after the Haymarket Tragedy. Public sentiment rapidly shifted against both immigrants and union causes.

Anti-immigrant sentiment was entrenched at the highest levels: Just four years before Haymarket, the Chinese Exclusion Act all but banned immigration from China. Policymakers, newspapers, and a large chunk of the public blamed immigrant workers, rather than employers, for accepting jobs at low wages, and demeaning cultural stereotypes about immigrants (especially from non-white, non-Protestant countries) encouraged people to think of immigrants as invaders.

Conditions were even worse for Black workers. In the post-Emancipation South, “convict leasing” systems allowed private companies to use state prisoners to work in their mines, fields, and factories, usually for no pay, under conditions little different from slavery (a practice that, while called by different names today, is still alive in parts of the South). Brief gains for economic and racial equality during the post-Civil War Reconstruction Era, such as the Freedmen’s Bureau, intended to support formerly enslaved people, were either thwarted by state “Black Codes” or outright abandoned and reversed by the late 1870s. Many freed Black people worked as sharecroppers, making pittance wages, with no access to state or federal financial assistance. When Black workers sought jobs in factories, employers often relegated them to the most dangerous, lowest-paid jobs. Other times, union-busting employers would promise Black workers good jobs, only to later reveal they were being recruited to replace striking workers, a situation that led more than once to deadly violence. Intertwined with the intense anti-immigrant backlash following Haymarket, anti-Black backlash against Reconstruction ushered in the Jim Crow era and further entrenched vast wealth and income inequalities. Capital’s use of racism and xenophobia to discipline and control labor, especially Black and immigrant workers, had by century’s end crushed most emerging worker movements and rolled back minimal policy gains.

While some white workers and labor organizations challenged racism and xenophobia in the 19th century, too many more didn’t. Many existing craft unions maintained exclusively white, male memberships, were enthusiastic backers of the Chinese Exclusion Act, and only rarely stood up for Black, women, or immigrant workers. The Knights of Labor, an industrial union (meaning it organized workers by industry and sometimes geography, rather than a particular job or occupation) had a membership nearing a million in the early 1880s, and in some cases supported racially integrated or women-led union locals. Racism and xenophobia took hold in its ranks, too, and, unable to unite workers under one banner amid intensifying employer and state repression, the Knights faded into irrelevance in the years after Haymarket. Business leaders were all too happy to pit white workers against Black or Brown workers. When railroad tycoon Jay Gould (allegedly) said he could “hire one half of the working class to kill the other half,” this is what he had in mind—racism, xenophobia, and sexism dividing working people and weakening their collective power.

In the wake of Haymarket, policymakers at both the state and federal levels made efforts to address underlying political, social, and economic inequalities, but their efforts were too little, too late. Three of those sentenced to death at Haymarket were pardoned by Governor John Peter Altgeld, and voters thanked him by voting him out of office. When better policies were enacted, such as New York’s 1895 law instituting a 10-hour work day for some employees, courts were quick to strike them down. It was not until the New Deal—50 years later—that state and local policymakers finally began to address some of the deep, structural economic inequities of the Gilded Age, while legislative progress on racial and gender equity took even longer.

Worker struggles underway this May Day remind us that even this past progress remains under constant threat. While today many laws, institutions, and much of public sentiment have changed for the better, income inequality has returned to historic highs while and racial and gender wage gaps, occupational segregation, and disparities in employment remain structural features of U.S. labor markets. On one hand, two-thirds of today’s union members are women and/or workers of color, and recent polls show public support for unions at generational high points. On the other hand, far too few of the workers who say they want a union have a pathway to forming one under our broken labor laws.

Rather than slide deeper into a Gilded Age and allow economic disparities to widen, policymakers ought to act decisively and enact pro-worker policies. Congress should prioritize raising the minimum wage, passing the PRO Act, and boosting funding to the National Labor Relations Board to protect workers’ right to unionize, as well as enforcing anti-discrimination in hiring and employment practices. States can reverse so-called “right-to-work” laws (designed from the start to entrench racist forms of anti-union repression) and ensure full union and collective bargaining rights for all, including the millions of public-sector, agricultural, and domestic workers who continue to be excluded from federal labor laws. Both state and federal lawmakers can take numerous measures to strengthen labor standards that prevent wage theft, improve worker health and safety, reform unemployment insurance systems, guarantee all workers have paid sick and family leave, and more.

Workers from across the globe, of all races, ethnicities, and genders, built the U.S., though the value of their labor has rarely been recognized or fully compensated. U.S. workers have gained legal rights and workplace improvements in fits and starts, most effectively through courageous, extraordinary struggles to build strong, multiracial unions capable of challenging massive imbalances of power at work and in the economy. This is as true today as it was on the first May Day in 1886, when workers rallied for an eight-hour day around the slogan that “an injury to one is the concern of all.” The events of 1886—powerful displays of solidarity and mass strikes for an eight-hour workday followed by absolute abuses of state power in executing innocent labor organizers—continue to inspire workers around the world to come together to demand fair, just workplaces, laws, and economies. This May Day, policymakers should heed workers’ calls for justice, take action to end long-standing constraints on worker power, and ensure that all can share in the gains they create.