While unemployment rates are sitting at their lowest levels in decades, wage growth (adjusted for inflation) remains slower than in previous periods of comparably low unemployment. Part of the reason why wage growth remains subdued is that productivity growth has been generally weak since the Great Recession ended. This week’s newsletter provides some guidance on a key question for macroeconomic policymakers like the Federal Reserve: do we need to take this slow rate of productivity growth as a given, or can we nudge productivity upward by allowing unemployment to sink even lower for longer?

Specifically, I address the widespread speculation about the possibility of “wage-led productivity growth”—the hypothesis that tight labor markets that push up labor costs lead firms to invest more in labor-saving equipment and practices. Some suggestive evidence of this wage-led productivity growth has been shown in patterns of macroeconomic data. This newsletter provides some more suggestive evidence from patterns of productivity growth broadly but also across a set of very detailed industries when the labor share of industry income rises and falls. Here are the key findings:

These results are obviously suggestive, not dispositive. The key challenge to testing the causal link that runs from higher pressure labor markets to increased effort by firms to find and adopt labor-saving practices and investments is finding truly exogenous changes in labor market tightness. This search for exogenous changes in the cost pressures firms face should be a prime preoccupation for macroeconomic policymakers in the near future. In the rest of this newsletter, we’ll describe our findings in a bit more detail and discuss their potential implications.

The two-way causal links between labor costs and productivity
It is well-known that in competitive markets productivity growth and wage growth are supposed to rise in tandem across the entire labor market, with the source of causality running from higher productivity to higher wages or labor costs. It is equally well-known that this has not happened in the U.S. economy in recent decades, strongly suggesting that the aggregate U.S. labor market does not fit textbook descriptions of competitive.

A much-less-discussed strand of economic thought highlights a potential reverse causality whereby rapid growth in labor costs spurs productivity growth as firms become more aggressive in finding labor-saving investments and practices. While a number of research papers have highlighted this reverse causality as a theoretical possibility, there has been less headway in assessing its real-world empirical relevance (see this Twitter thread for an excellent list of papers on this topic).

Part of the reason for the lack of empirical findings on this issue is that it’s hard to isolate the causal effect of faster-growing labor costs on productivity growth. As noted before, some correlation between labor costs and productivity is to be expected, so identifying the one-way causal effect is quite hard. The obvious first-pass solution to this problem of causality is to use leads and lags, and this is the strategy we adopt in this newsletter.

In Figure A, we show the effect of a one-year change in the labor share of corporate-sector income on average productivity growth over the subsequent two years (with the change represented by a fixed dot and the confidence interval represented by the dotted line). At first blush, this regression setup could do a decent job of isolating the causal effect of labor cost pressure on productivity growth as it seems unlikely that average productivity growth between 1997 and 1999 could be the causal force behind a change in the corporate labor share of income between 1996 and 1997. We use two-year changes in productivity growth because this data series is so volatile, with any timespan significantly shorter than two years displaying lots of statistical noise. 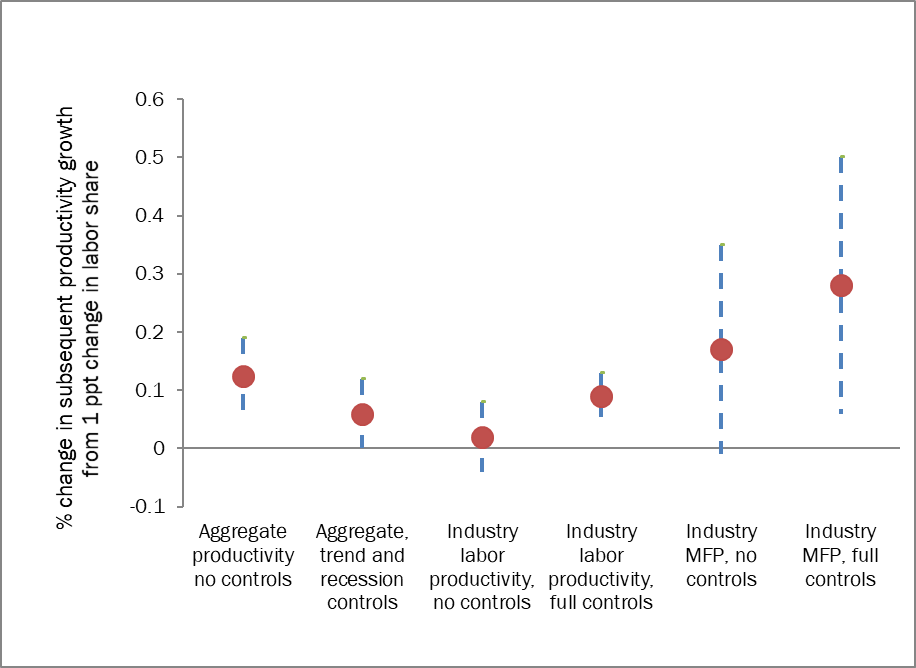 Note: Aggregate labor share calculated as labor's share of corporate sector income, as described in the January 30, 2019 edition of the newsletter. "Full controls" in each regression include industry and year fixed-effects as well as industry-specific trends. The dot represents the coefficient value and the bars span two times the standard error of the regression estimate. MFP stands for multifactor productivity.

Using data from 1949 to 2019, the association between labor share changes and subsequent productivity growth is significant, as shown in the first data point reading from the left in Figure A. With no other controls, a 1 percentage-point increase in the labor share of income leads to a 0.125 percentage-point increase in average productivity growth over the next two years. We also run the same regression using controls for a trend, recessions, and interactions between recessionary quarters and the change in the labor share of income. These controls reduce the coefficient on the labor share in half, though it remains statistically significant.

The figure also shows coefficient estimates from the same regression using data from a panel of 124 industries (mostly manufacturing) between 1987 and 2016. Again, we regress the subsequent change in the two-year average of productivity growth against a change in the labor share of industry income. This bivariate relationship is shown in the figure. It indicates that a 1 percentage-point increase in the labor share is associated with a 0.02 percent increase in average productivity growth over the subsequent two years. One important thing to note about this regression is that the conventional view that causality runs from productivity growth to changes in labor costs does not hold at the industry level. Across industries, the predicted relationship between productivity and labor cost growth in conventional presentations of competitive labor markets is zero.

In this richer industry data, we can also include controls for both year and industry fixed effects, as well as industry-specific trends. In this case, the relationship between the change in labor’s share and the subsequent growth in productivity is actually strengthened by the inclusion of more controls. In the regression with a full set of controls, a 1 percentage-point increase in the labor share is associated with a 0.09 percentage-point change in average productivity growth in the subsequent two years.

While previous EPI research has focused on the role of labor cost pressure in boosting capital investments, we also tested whether a rising labor share is associated with faster multifactor productivity (MFP) growth at the industry level. MFP measures output produced with a fixed bundle of labor and capital. It is often thought to serve as a proxy for general technological or organization advances. But it has also been shown to capture the effects of economies of scale or just more-intensive utilization of factors of production.

A far-smaller number of these disaggregated industries reported MFP growth—just 11. Yet even with that much-smaller data set, an economically and statistically significant relationship between a rising labor share of industry income and faster subsequent MFP growth is found. This could result from firms feeling pressure to adopt more-efficient managerial practices and production techniques in response to labor cost pressure—or it could simply be the result of economies of scale that are detectable as output growth rises and pushes up wage growth.

Implications
An extensive, if not well known, strand of macroeconomic theory predicts that tight labor markets that begin to push labor cost growth higher might spur a countervailing reaction from firms looking to protect profit margins. One strategy these firms can take is to search more aggressively for labor-saving investments and practices. The incentive to aggressively search for such productivity improvements might be spurred as the labor share of income begins to rise (a development that means by definition that labor costs rise a bit faster in inflation-adjusted terms than productivity). If this theory is true, then it suggests that the weak productivity growth of the past decade should not be treated as a given that can’t be changed. Instead weak productivity growth should be seen as damage done—by the Great Recession and subsequent too-slow recovery—that has yet to be addressed.

Of course, these findings should be explored further, and particular attention should be paid to finding unambiguously exogenous sources of labor cost growth that are clearly not caused by contemporaneous productivity growth. Such exogenous changes are hard to find—minimum wage changes are the most obvious ones. But the minimum wage changes seen in the U.S. economy in recent decades have generally not been large enough to lead to labor cost increases large enough to spur a reaction from firms looking for productivity improvements.