Education Investment (Not Low Taxes) is Key to State Prosperity

A new paper released today by EARN (the Economic Analysis and Research Network) looks at what states can do to create strong state economies that support high wage jobs for their people. Is it low taxes, well educated workers, or something else?

When we look at data from across the country, two clear conclusions emerge:

Looking at this graph of overall tax levels and median earnings (a measure of wages that includes both hourly and salaried employees) one might suspect that there are just too many differences between states to see a clear correlation on any one variable.

There is no significant correlation between overall tax levels and high-wage economies: Median hourly wage, and state and local taxes as a share of state personal income, by state, 2010 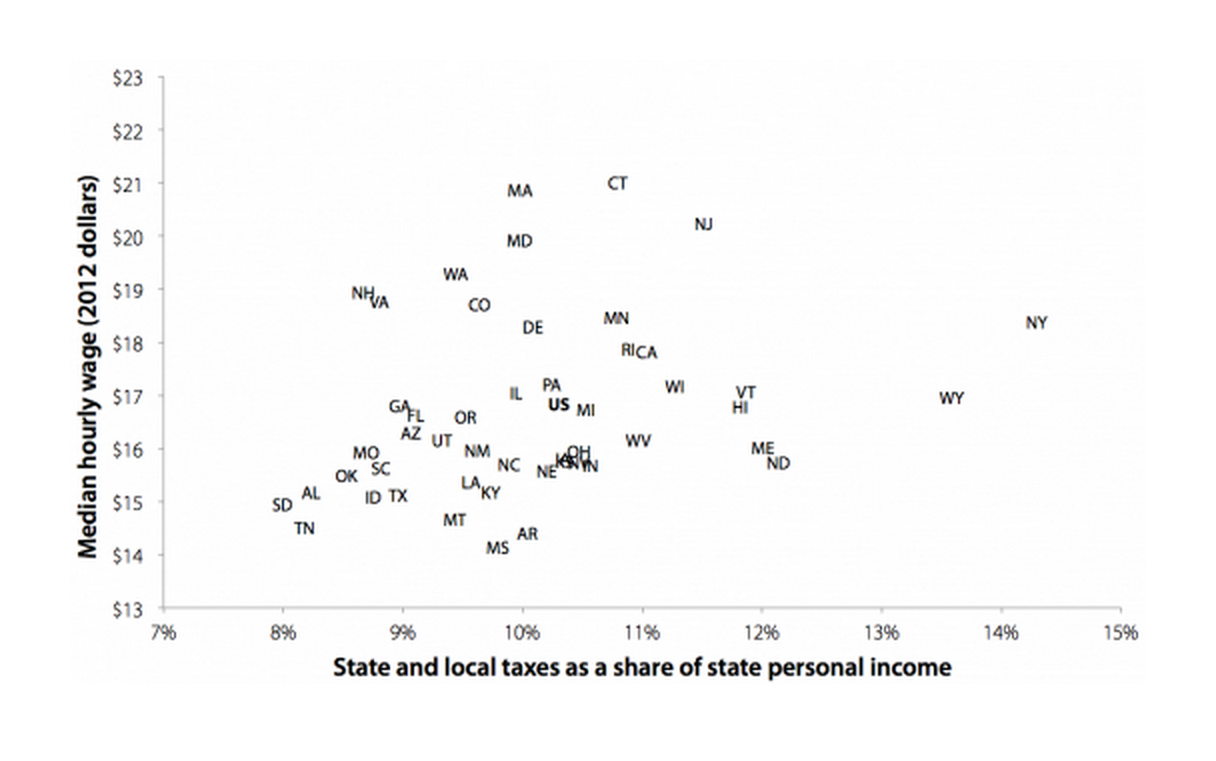 Median wages are substantially higher in states with better-educated workers: Relationship between state median hourly wage and share of state's workforce with a bachelor's degree or more education, 2012 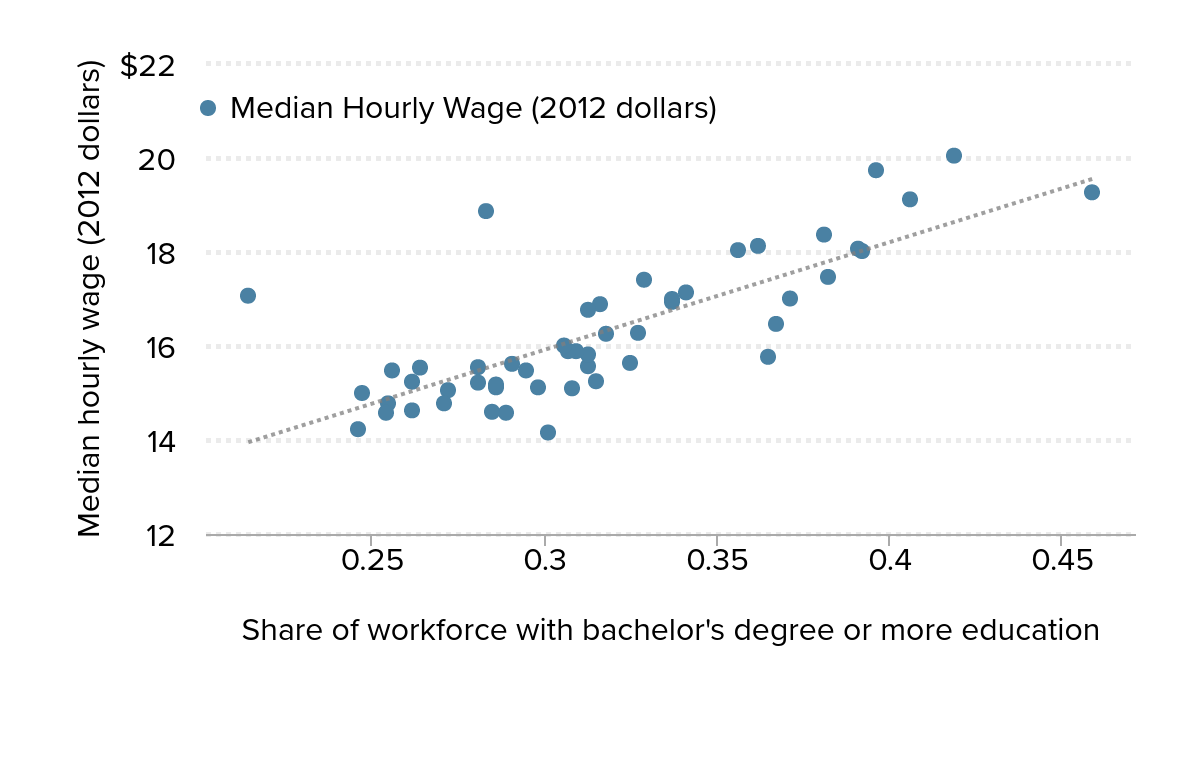 To some degree this finding is simply stating the obvious. We know that individuals with higher levels of education will generally earn higher wages, and it makes sense that what would be true for each worker would be true for the workforce overall.

In our modern economy, employers who pay good wages generally need well trained and better educated workers. By improving the overall level of education of its workforce, a state can increase the productivity of firms in its economy. That allows firms to increase both profits and wages. As obvious as this fact is, education often receives less attention in state economic policy discussions than do taxes, regulations, and business incentives. Why is that?

In part it could be that states seek quick fixes and building a well-educated workforce can require a long term commitment, but there’s another reason why education may not be receiving the attention in state economic development debates that the data suggests it should: the pattern we see today, where there is an extremely strong correlation between the level of education of a workforce and the wages of the people in that state, is relatively new. As recently as the late 1970s, many of our highest wage states had very few workers with a college degree:

There was a much weaker correlation between education and wages as recently as 1979: Relationship between state median hourly wage and share of state workforce with a bachelor's degree or more education in 1979 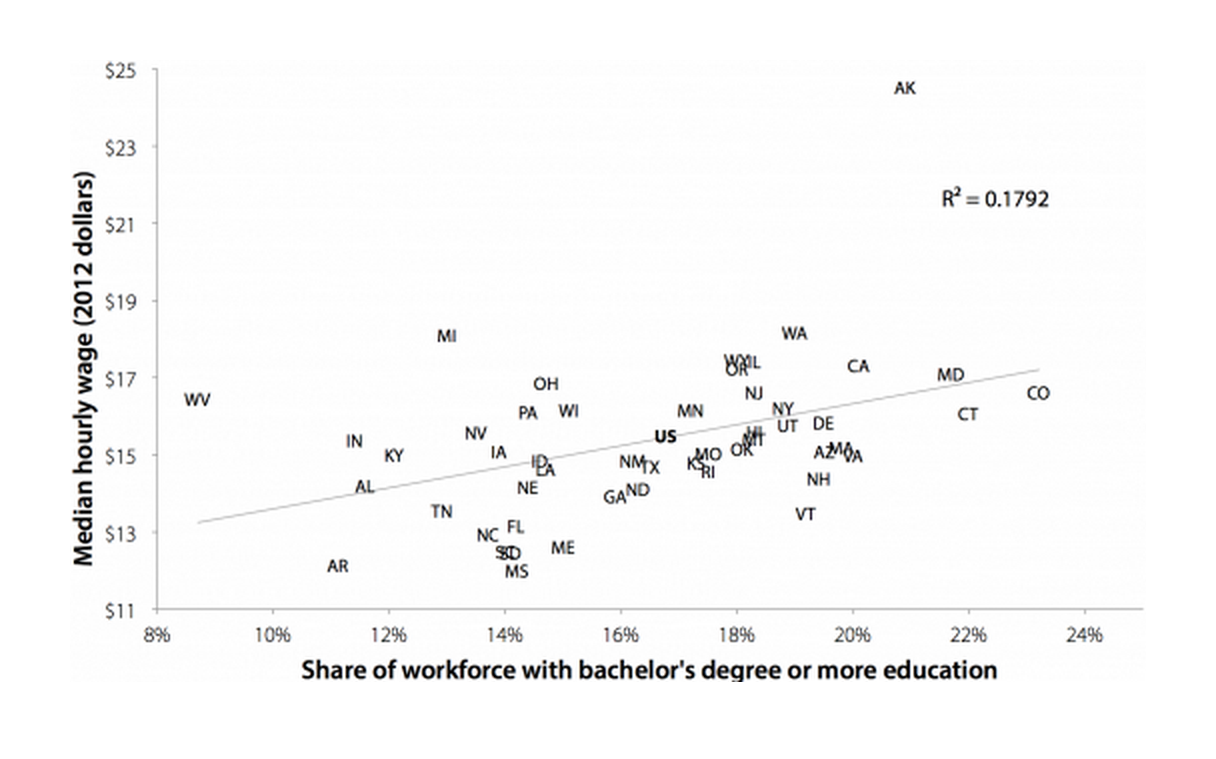 In the 70s, states with heavy industry and strong unions had high wage economies with good jobs for many workers regardless of their level of education. But in today’s world, states that want to build strong, high wage, economies cannot ignore the importance of providing all of their people with the opportunity to receive a high quality education (and the related supports that all children need to reach their full potential).

At the national level there are a number of policies that can raise wages across the board: appropriate fiscal policies during periods of underemployment; equitable labor laws that allow workers to organize; trade policies that aim to raise living standards in the US and abroad; and regulatory policies that protect our economy. But very few of these tools are available to state governments.

States can enforce labor standards—like minimum wage laws and sick leave provisions—that make life significantly better for lower wage workers and have a modest positive effect on the overall economy. But along with those steps that can improve the lives of working people immediately, states can build long term economic strength by investing in strategies that improve the education, skills, and productivity of all of their people. What the best ways are to achieve that objective is a question with no one simple answer. Finding good answers to that question is likely the most important thing state governments can do to build strong, high wage economies, capable of delivering broad based prosperity.