The never-ending fiscal and budget policy debates inside the Beltway have moved on to “tax reform.” Much of this tax reform concerns the corporate income tax, and the conventional wisdom in this debate is that the goal of reform should be revenue-neutral changes that broaden the base and lower the tax rate.

Given widespread concerns about federal budget deficits, it seems odd to call for tax changes that lower rates. The putative impetus for these calls is the belief that the statutory corporate income tax rate is too high—placing an excessive burden on U.S. corporations that leads to poor economic performance.

Why we need a corporate income tax

Third, the corporate income tax serves as a backstop to the individual income tax because it precludes using the corporation as a tax shelter for high-income taxpayers. Gravelle and Hungerford (2008, 422) note that if there were no corporate tax, “high-income individuals could channel funds into corporations and, with a large part of earnings retained, obtain lower tax rates than if they operated in partnership or proprietorship form.”

Corporate profits as a percentage of national income, 1947–2012

The trend in real GDP growth is displayed in Figure B (dotted line). With its ups and downs since 1947, real GDP growth basically fluctuated around a downward trend. The statutory corporate tax rate is also displayed in Figure B (in dark blue). The tax rate leveled at about 52 to 53 percent through most of the 1950s and 1960s, then fell in steps to 35 percent. Again, this suggests a positive association between GDP growth and corporate tax rates.

The statutory corporate tax rate, however, does not necessarily capture the tax burden on new investment (Gravelle 1994). The effective marginal tax rate on earnings from investment could be a better measure of the tax burden.5 The trend in the effective marginal tax rate on capital income between 1953 and 2005 is also displayed in Figure B (in solid light blue).6 Except for a rather large dip followed by a large increase over the 1960s, the overall trend appears to have been downward between 1953 and 2005.

It is possible that the corporate tax rate affects economic growth with a lag. Consequently, real GDP growth is compared with the tax rates from the previous year. Figure C shows the scatter plot of real GDP growth and the 1-year lag of the statutory corporate tax rate between 1948 and 2010.7 The straight line is the trend line defined by the scatter plot.8 The slope of the trend line is upward, and the estimated correlation between the two series is +0.167, suggesting that higher tax rates are related to higher economic growth the next year. This estimated correlation, however, is not statistically significant.9 In other words, there is no apparent association between the statutory corporate tax rate and economic growth. 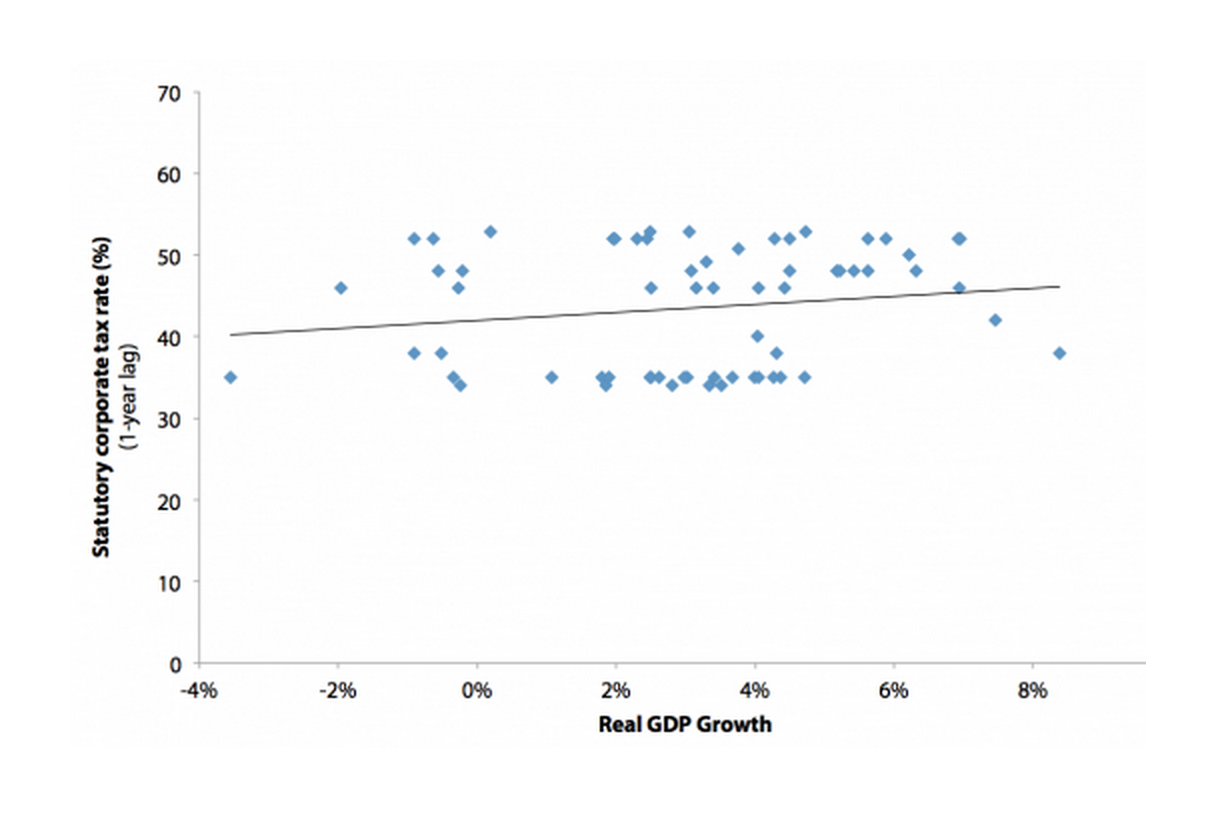 Note: Each dot shows the real GDP growth rate for a particular year and the statutory corporate tax rate from the previous year. The line describes the relation between the two variables.

Figure D shows the scatter plot of real GDP growth and the 1-year lagged value of the effective marginal tax rate on capital income between 1954 and 2006. The trend line in this case is slightly downward sloping—the “right” direction according to those who argue that higher tax rates retard economic growth—and the estimated correlation is −0.064. This would suggest that a higher effective marginal tax rate is associated with slower economic growth. The estimated correlation, however, is not statistically significant.10 Again, there appears to be no relationship between capital income taxes and economic growth. 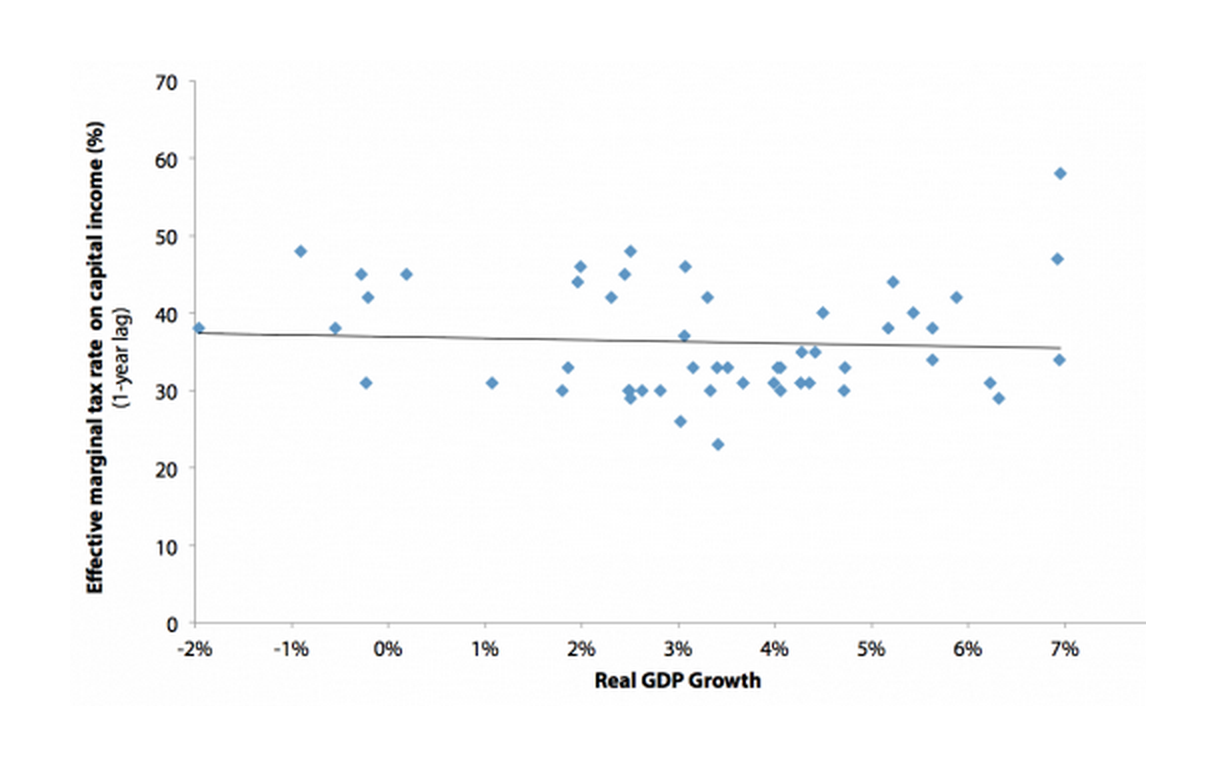 Note: Each dot shows the real GDP growth rate for a particular year and the effective marginal tax rate on capital income from the previous year. The line describes the relation between the two variables.

Corporate tax reform is a topic of discussion among policy analysts and policymakers. The proposed options range from broadening the tax base/lowering the rates to moving to a territorial system with low tax rates to outright elimination of the corporate income tax. Given that the corporate income tax serves several important functions, outright elimination of the tax is ill advised. The justification for lowering the corporate tax rate is that it will increase economic growth.

The top statutory corporate tax rate has been falling since the early 1950s. The top corporate tax rate was 52 percent throughout the Eisenhower administration—17 percentage points higher than the current top rate of 35 percent. U.S. GDP grew by almost 4 percent annually in the 1950s compared with a 1.8 percent growth rate in the 2000s. On the surface, it would appear that more robust economic growth is associated with higher corporate tax rates. Further analysis, however, finds no evidence that either the statutory top corporate tax rate or the effective marginal tax rate on capital income is correlated with real GDP growth.

Thomas L. Hungerford joined the Economic Policy Institute in 2013. Prior to joining EPI, Hungerford worked at the General Accounting Office, the Office of Management and Budget, the Social Security Administration, and the Congressional Research Service. He has published research articles in journals such as the Review of Economics and Statistics, Journal of International Economics, Journal of Human Resources, Journal of Urban Economics, Review of Income and Wealth, Journal of Policy Analysis and Management, Challenge, and Tax Notes. He has taught economics at Wayne State University, American University, and Johns Hopkins University. He has a Ph.D. in economics from the University of Michigan.

Multivariate time-series regression techniques were used to determine the statistical significance of the estimated relationship between corporate tax rates and real GDP growth. Data from 1947–2010 are used for the regression analysis. The standard errors were corrected allowing for heteroskedastic and autocorrelated error-term using the Newey-West procedure with five lags. All variables were tested for the presence of a unit root. Most variables were found to have a unit root and these variables were first differenced for the analysis (i.e., the one-year change in the variable is used in the analysis); none of the variables appears to be cointegrated. The specifications and the other explanatory variables included in the analysis (which are thought to affect the dependent variables) have been used by other researchers in empirical research (see Lee and Gordon 2005). The tax rate variables are entered into the regression as the change in the after-tax or net-of-tax shares, which are equal to 1 minus the tax rate (i.e., ∆(1-TR)). In addition to the tax rate variables, right-hand side variables include the population growth rate, the change in the proportion of the population with at least a four-year college degree, and the change in federal current expenditures as a percentage of potential GDP (Lee and Gordon 2005). The regression results are reported in Table A1 (for the statutory corporate tax rate) and Table A2 (for the effective marginal tax rate on capital income).

*** Significant at the 1 percent level

1. For a recent example, see Graham Bowley, “The Corporate Tax Games,” New York Times, May 3, 2013, p. B1. Gravelle (2012), however, shows that the effective U.S. corporate tax rate is not much different from the OECD average (weighted by GDP).

5. Neubig (2012) argues that many corporations may be more concerned with the statutory corporate tax rate rather than the effective tax rate, which includes the effects of all features of the tax code.

8. The trend line is the straight line that best fits or describes the relation between two variables.

9. The hypothesis that there is no relation between the two variables cannot be rejected. Additionally, multivariate regression analysis shows that the estimated association between real GDP growth and the 1-year lag of the corporate tax rate is small and not statistically significant. In addition, specifications using a 5-year lag, a 10-year lag, and a 10-year distributed lag yield similar results with coefficient estimates that are not statistically significant. The regression results are reported in the appendix. See Hungerford (2012) for a description of this kind of analysis.

10. The estimated relationship between these two variables in a multivariate regression analysis is also small and not statistically significant. Furthermore, specifications using a 5-year lag, a 10-year lag, and a 10-year distributed lag yield similar results. The regression results are reported in the appendix tables.

Congressional Budget Office. 2012. The Distribution of Household Income and Federal Taxes, 2008 and 2009.

Neubig, Thomas S. 2012. “Interaction of Tax and Financial Accounting on Tax Reform.” Testimony before the House Committee on Ways and Means, February 8.