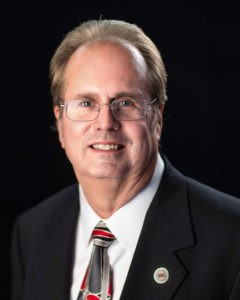 Gary Jones was elected UAW president in June 2018 at the union’s 37th Constitutional Convention. Jones previously served as the union’s Region 5 Director. Jones was first elected to serve as director of UAW Region 5 in a special election held Oct. 19, 2012, in Kansas City, Mo.

A graduate of the University of Tulsa and a certified public accountant, Jones was appointed top administrative assistant to former UAW Secretary-Treasurer Roy Wyse in 1995. He continued to serve in that capacity to Secretary-Treasurers Ruben Burks and Elizabeth Bunn, until his appointment as Region 5 assistant director in 2004.

In 1990, former UAW President Owen Bieber and then-Secretary-Treasurer Bill Casstevens appointed Jones to the International staff. He was assigned to the union’s Accounting Department. A year later, Jones was named chief accountant of the UAW.

A UAW Local 1895 member, Jones was hired at Ford Motor Co.’s Glass plant in Broken Arrow, Okla., in 1975. He became a member of UAW Local 249 when he transferred to the Kansas City Ford Assembly Plant when the glass plant closed.

Jones is a lifetime member of the NAACP and various other civic and political organizations. Jones and his wife, Cindy, live in Canton, Michigan. They have two daughters and three granddaughters.