What to watch on jobs day: A strong finish to 2021, but Omicron’s impact looms

In an unprecedented change, the Bureau of Labor Statistics (BLS) released the monthly Job Openings and Labor Turnover Survey (JOLTS) the same week as the monthly employment situation report. Given this new release schedule, I’m going to talk about what we learned from this week’s JOLTS report, which provides data for the full month of November (or the end of November, depending on the specific measure) as a preview for the jobs day release on Friday, because the reference week for Friday’s numbers is shortly after at December 5-11. This means that the rapid Omicron variant surge in the United States will not affect the trends released on Friday, as job growth is expected to approach 7 million for 2021 as a whole.

The JOLTS report for November continued to show high levels of churn in the labor market and strong net job growth. Job openings ticked down a bit, while hires ticked up and quits hit another series high. The media has focused on the high quits rate, but what’s often missing from that coverage is that workers who are quitting their jobs aren’t dropping out of the labor force, they are quitting to take other jobs. Hiring continues to outpace the number of quits, and the labor force continues to claw its way back after a huge drop in the spring of 2020. While the majority of job losses added to the ranks of the unemployed (+17.4 million), the labor force fell by nearly 8 million workers in March and April 2020 and has regained about 70% of those losses since then, including an increase of 1.8 million over the last nine months, when the quits rate has been so high.

It’s useful to note that accommodation and food services always tends to have more churn than other sectors. In particular, accommodation and food services has always exhibited a higher quits rate than any other sector (since the survey began in 2000) and the highest or second-highest hires rate (second only to arts, entertainment, and recreation). High churn in this industry is not surprising given that it’s also the lowest paid of the major sectors in the U.S. economy, but quits are happening to a much greater extent now than ever before—with a bigger increase than in any other sector. This fact, combined with the strong wage growth seen in this industry in 2021, implies workers are leaving their jobs to take jobs with higher pay, likely often within the same sector.

The figure below tells us what’s happening with churn across the labor market, charting the hires rate against the quits rate for major sectors using the latest JOLTS data from November. The 45-degree line represents where hires and quits rates are equal. Notably, all the data lie above the 45-degree line, meaning that hiring exceeds quits in all sectors. So, while there are record numbers of quits, workers aren’t just leaving the labor force: most are taking other jobs, often in the same sector.

The size of the sector bubbles represents average hourly wages of private-sector workers in each sector: the smaller the bubble, the lower the wage. Accommodation and food services—with the lowest wages across sectors—is experiencing the highest churn, i.e. high rates of both quits and hires. Financial services—second in average wages only to the highest wage information sector—experienced the least amount of churn. Workers aren’t switching jobs in those higher paid sectors—which likely also have better benefits and working conditions, including safety and health standards—at nearly the rate they are in accommodation and food services. 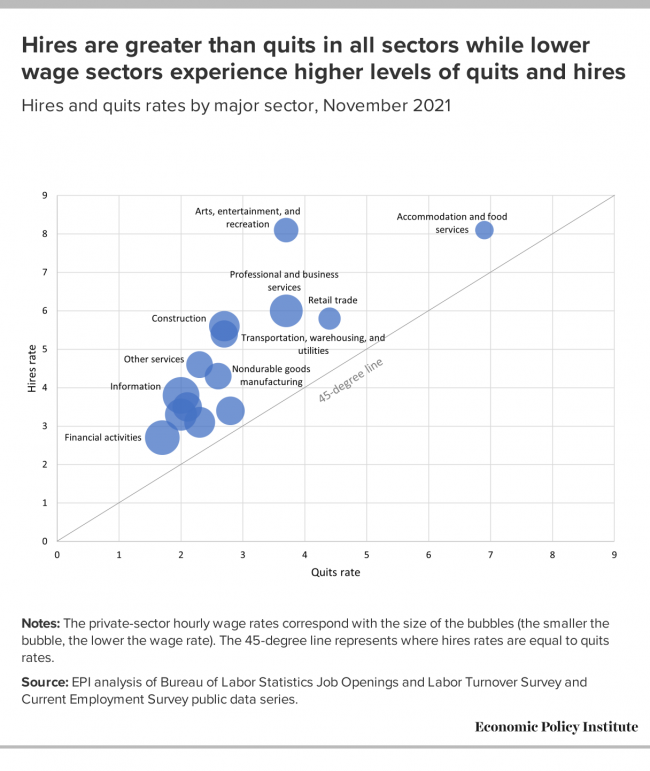 The employment situation report—with data on payroll employment and the unemployment rate—also provides a promising picture of the state of the labor market—before the Omicron variant surge hit the United States. Average monthly job growth came in at 555,000 for the first 11 months of 2021, and if initial expectations are realized, employment may approach nearly 7 million jobs added over the year.

When the jobs report is released on Friday, I expect a continuation of the trends we’ve seen over the last few months: a swift and steady return to labor market health. The speed of this recovery in 2021 has been far faster than the recoveries from the last three recessions—more than twice as fast as any 11-month period in the recovery from the Great Recession when the pursuit of austerity resulted in an unnecessarily slow recovery.

This faster growth in 2021 was fueled by the Biden administration’s American Rescue Plan, despite its effects waning significantly over the last several months with no additional economic impact payments and the expiration of enhanced insurance benefits. However, the expanded child tax credits certainly continued to play a vital role in supporting families through the end of 2021 (e.g., lessening food inadequacy) as well as feeding the recovery itself through increased spending (though it was, inexcusably, allowed to expire at the end of 2021).

Given that fiscal stimulus is on track to wind down substantially in 2022, even if the longer-term investments promised in the much-needed Build Back Better Act are realized, it is vital that Federal Reserve policymakers allow the recovery to continue without contractionary measures like interest rate hikes. Though it will not affect the trends released on Friday for December, the surge of the Omicron variant will likely put a dent in the positive news in the January data, when they are released on February 4. Hopefully, that effect will be shorter-lived than the Delta impact on the labor market and the labor market will continue its swift recovery.

But even when we regain pre-pandemic labor market conditions, it is important not to overstate the wonders of that labor market. Black workers had a higher unemployment rate before the pandemic than white workers have now. Disparities in wage levels were wide and occupational segregation was rampant. Parents had trouble accessing high-quality child care and millions of people lived in poverty. We need to continue to make investments in our physical and human capital infrastructure to grow back faster and stronger.