College athletes and Ph.D. students both work for the university, but only one earns a salary

Beginning in January 2021, new rules will go into effect that will allow NCAA student-athletes to profit from the use of their names, images, and likeness. While the details of these new rules will require much deliberation among each NCAA division, one thing will not be considered—salaries for college athletes from the universities.

Why won’t college athletes be paid a salary?

Several reasons are floating around. One reason is the NCAA does not consider college athletes employees of the universities. Another reason is that these players are given a lot of perks. In a recent Los Angeles Times article, Dan Radakovich, athletic director at Clemson University, argued against paying college athletes since they have access to “world-class facilities, world-class coaching, and incredible academic support.”

But there already exists a group of students who are employees of the university, have access to world-class facilities, teaching, and academic support, and no one calls them selfish when they receive their salaries. Who are these students? Ph.D. students.

Wait, are you saying Ph.D. students receive a salary?

Yes, because they work for the university. A large percentage of Ph.D. students are funded via fellowships or assistantships. Funding, which covers tuition and provides a stipend, varies across institutions and doctoral programs due to what can be viewed as “educational hierarchy.” Assistantships require that Ph.D. students’ work anywhere from 20 to 40 hours per week that include duties such as grading, managing labs, or lecturing. Additionally, doctoral students are awarded (or sometimes apply for) money that allows them to attend international or out-of-state conferences to present their research and network with others in their field.

In short, Ph.D. students sign a contract with an institution, agree to work a certain number of hours per week, maintain a certain GPA, and conduct research. In exchange, the university covers their tuition and pays them a salary. What do college football players do? Sign a contract (you may have seen signing day on ESPN), maintain a certain GPA, and kick butt on Saturday, which requires countless hours of practice! Additionally, their success can help recruit up to tens of thousands of students and generate millions of dollars for the institution. 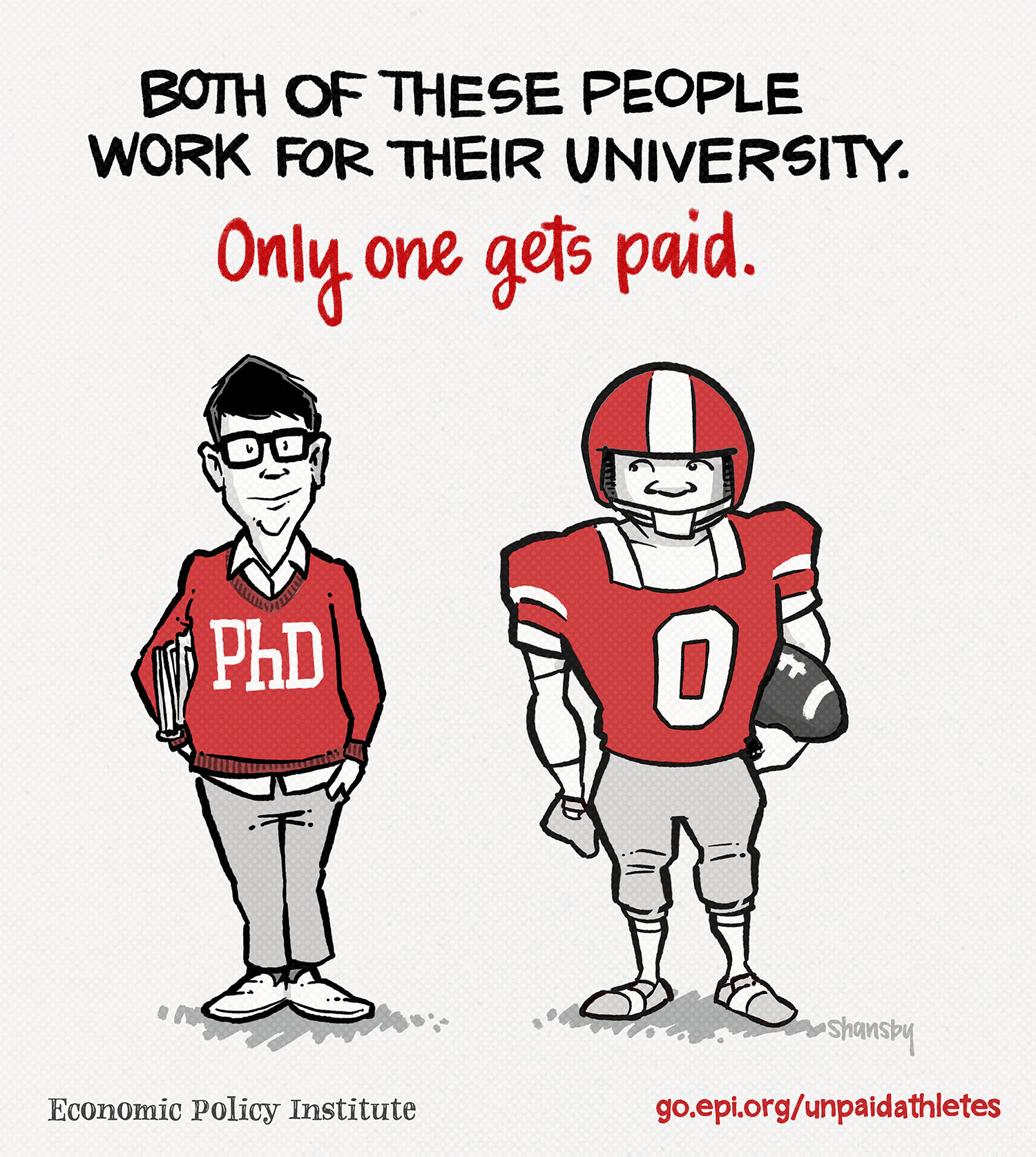 It’s simple labor economics. In theory, when workers and employers interact in the labor market, workers agree to sell their labor in exchange for a wage that is market-determined. These wages are influenced by several factors including the number of workers available (supply), the number of workers needed (demand), skill sets, locations, and bargaining power.

This fact can be seen in Ph.D. student salaries. All Ph.D. students are not paid the same salary. Business school and STEM doctoral students are paid more than English or social work Ph.D. students because business and STEM programs receive more money from various sources. These programs bring more revenue to the university since they supply graduate students to industries that generate lots of money due to the high demand for these students. College athletes could be paid similarly based on the success of the program and the revenue they generate.

But that would lead to some schools recruiting ‘better’ players and leave other schools out in the cold.

Very true! But this happens already. Morehouse College doesn’t have the resources that the University of Georgia has to recruit football players. Additionally, Ph.D. programs face this same imbalance. Look at the number of Ph.D. students Harvard recruits for its economics program relative to Louisiana State University (LSU). This is a fact of life that already exists.

But isn’t it risky giving these players money? They could quit school.

True, but the same is true of Ph.D. students. Ph.D. students are paid regardless of whether they quit their program. When Ph.D. students quit a program, they are allowed to keep their money and can be awarded a master’s degree. When football players quit the football program, they are often quitting due to injury. Who is taking the bigger risk in this case? Doesn’t economics teach that workers in risky jobs earn more due to the risk they undertake?

While I’m discussing risk, could it be that the NCAA and others believe it is risky to give certain students money? Just examine the composition of college athletes versus Ph.D. students. These students look very different and people may, consciously or unconsciously, think these students won’t act responsibly with their money. Clemson University head coach Dabo Swinney suggested that football players are not starving since they have money for cars and tattoos. But it shouldn’t matter how workers spend the money they earned from their employer. Should we start checking how Ph.D. students spend their salaries? How about college football coaches like Dabo?

Why should I care?

High-stakes college athletics is a super-charged microcosm of the broader U.S. economy: huge income is generated in the aggregate, but a select sliver reaps massively disproportionate gains. The fact that college athletes are denied access to labor markets shows how disempowered they are relative to how much income they help generate.

Although college athletes will be able to profit from their name, image, and likeness in the future, not all athletes will profit from this rule, and none of them will be able to receive salaries from their employer—the university. They should receive tuition waivers and salaries just like Ph.D. students, and these stipends should be commensurate to the income generated by their sports program for the university. Why are we allowing the NCAA to deny college athletes access to income that their labor produces? In this regard, the NCAA and universities tax away 100% of athletes’ earnings and redistributes them to athletic departments. All college athletes work for the university and should receive compensation for their labor.